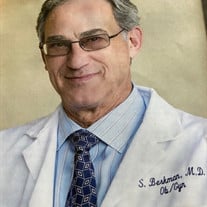 Dr. Steven Berkman of Old Bridge, NJ died peacefully on March 28th, 2020. He was born June 7th, 1945 to Leon and Natalie (Koplin) Berkman in Queens, NY, and lived there with his brothers Jeffrey and Brian until college. He attended Emory University in Atlanta, GA, where he majored in Biology and Chemistry. He was a member of Tau Epsilon Phi Fraternity and the Alpha Epsilon Delta Pre-Med Honor Society. After graduating, he married Margo Fienberg, and attended New York State University, College of Medicine - Downstate in Brooklyn, NY. They lived there through his medical school and residency, where he specialized in Obstetrics and Gynecology. He served as Chief Resident, obtained certification from the American Board of Obstetrics and Gynecology, and became a Fellow of The American Congress of Obstetricians and Gynecologists as well as the American College of Surgeons. After moving to Closter, NJ, their son Scott was born in 1981. They lived there for 26 years and were active in the local Jewish community at Temple Beth El and Scott's school. He later moved to Old Bridge, NJ, and married Mildred Caicoya in 2006 in Puerto Rico. They loved to vacation there and visit with family. One of his favorite places in the world was his 'private' beach at their home in Ponce. After practicing for 48 years and helping bring countless lives into the world, he retired from medicine in December 2019 due to illness. Throughout his career, he was dedicated to patient care and teaching others. Steven loved his family, travel, movies, TV (especially the original StarTrek), theater, music, good food, crossword puzzles, and spending time with friends. He is survived by his wife Mildred and sons Scott (Sheryl), Rosendo (Victoria) Cedeno, Robert (Annie) Cedeno, and grandchildren Maxim, Charlotte, Xavier, and Mason. Online condolences may be made to the family at www.HegartyScaliaFuneralHome.com

Dr. Steven Berkman of Old Bridge, NJ died peacefully on March 28th, 2020. He was born June 7th, 1945 to Leon and Natalie (Koplin) Berkman in Queens, NY, and lived there with his brothers Jeffrey and Brian until college. He attended Emory... View Obituary & Service Information

The family of Dr. Steven Berkman created this Life Tributes page to make it easy to share your memories.

Send flowers to the Berkman family.