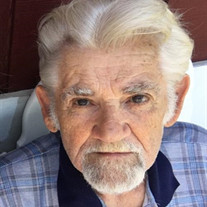 William B. Sulikowski, 87, of Manalapan, NJ passed away peacefully in his home surrounded by his loving family. William was variously called Bill, Elvis, Bolek, or Dziadzi by friends and family. He was born July 18, 1933 in Volhynia, Poland to mother, Alexandra and father, Anthony Sulikowski. At the age of 11, Bill and members of his family were forced to flee Poland as WWII raged in Europe. Upon arriving in the United States, he settled first in Ohio, then moved to New Jersey, where he graduated as an electrician from Woodbridge Vocational High School . Soon thereafter, he met the love of his life, Mary Nawoj, while attending the engagement party of his brother, Stefan and Mary's sister, Sophie. Bill and Mary married in 1957 in Sayreville, NJ. They moved to Perth Amboy where they started a family of their own. Bill proudly served his country as a detonation expert in the United States army-spending much of that time in Germany. He was honorably discharged in 1963. In 1972, Bill, Mary, and their three daughters moved to Manalapan, NJ where Bill lived the rest of his days. Bill had worked as a chemical laboratory technician at National Lead. After the closing of National Lead in 1980, he was an apprentice to a tile contractor, and eventually started a business with his son-in-law, Richard, in the same field. Bill was active in the Elks Club and was an officer of the United Poles of America. Bill was known as a man who could repair anything--- if a broken item had a motor, battery, or plug, you could count on Bill to fix it. He was also a baker of Christmas cookies---his gift to loved ones around the holidays. Bill also had a passion and a gift for gardening. He proudly shared heirloom tomatoes, cucumbers, squash, and more with family and friends. He made raspberry wine from berries that he grew in his quarter acre garden. Bill was a lover of all of God's creatures--- and they loved him back. Over the years, he befriended wildlife including fox, ducks, geese, and a wide variety of birds. Over the years, his domestic companions included chicks, cats, and dogs. His most beloved pets were his hound, Regan, his pug, Tex, and the late Puggy. In addition to his passion for nature and his uncanny mechanical abilities, in Bill's younger days, he made an enviable dance partner and sought- after bowling companion. Bill is survived by Mary-his beloved wife of 63 years. He is also survived by Lucille Mannino and husband, Richard; daughter Debra Getz; and Joann Ganim and her husband, Donald. Bill was 'Dziadzi' to six cherished grandchildren-Vincent William Mannino, Christie Mannino, Richard V. Mannino, Alex Getz, Donald Ganim III, and William Ganim. Bill is also survived by Genevieve Klajn---the oldest of his 5 siblings. The family will receive friends from 4:00 pm until 8:00 pm on Monday, October 26, 2020 at Michael Hegarty & John Vincent Scalia Home for Funerals--- 3377 US Highway 9, Old Bridge, New Jersey. A Christian burial will be held at 10:00 am on Tuesday, October 27 at St. Thomas More Church located at 186 Gordon's Corner Road, Manalapan NJ. Interment will be at St. Gabriel's Cemetery in Marlboro, NJ. Online condolences may be made to the family at www.HegartyScaliaFuneralHome.com

William B. Sulikowski, 87, of Manalapan, NJ passed away peacefully in his home surrounded by his loving family. William was variously called Bill, Elvis, Bolek, or Dziadzi by friends and family. He was born July 18, 1933 in Volhynia, Poland... View Obituary & Service Information

The family of William Sulikowski created this Life Tributes page to make it easy to share your memories.

William B. Sulikowski, 87, of Manalapan, NJ passed away peacefully...

Send flowers to the Sulikowski family.