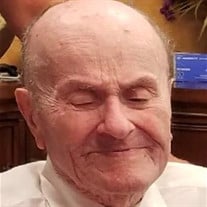 William Scaggs, 89 of Old Bridge, New Jersey passed away on Thursday, May 3, 2018. Born Friday, April 5, 1929 in Springfield, Illinois. William would graduate from High School and go on to join the United States Air Force. He would serve his country honorably during the Korean War. Upon arrival back to the United States William settled in Brooklyn, NY. It is there that he would meet the love of his life, Barbara. The couple would marry and begin their family there. Eventually they would move to Old Bridge, NJ until a job transfer brought them to Staten Island. It was three years later that the family would return to Old Bridge and remain there. William was a Department of Defense Contractor who worked with Bendix Lockheed as an Electronics Technician. William was a family man, when he was younger he played the Saxophone and enjoyed listening to Big Band and Jazz Music. He enjoyed watching sports games and was a fan of the NY Yankees. He will be missed by all those that knew him. William was predeceased by his beloved wife of 46 years, Barbara, who passed away in 2000, and by his loving son Anthony, who passed away in 2016. William is survived by his loving children, Barbara Ann McCauley and her husband Richard, William Scaggs, and Vincent Scaggs, by his loving daughter in law Beryl, and by his cherished grandchildren, Richard, Jennifer, Stephanie, Cheryl, and Theresa. A Private Funeral service will be held on Tuesday. Interment will be in Cloverleaf Memorial Park, Woodbridge, NJ. The family will receive friends from 2:00 PM to 4:00 PM and 6:00 PM to 9:00 PM on Monday, May 7, 2018, at Michael Hegarty & John Vincent Scalia Home For Funerals and Cremation Service, 3377 US Highway 9, Old Bridge, New Jersey. Online condolences may be made to the family at www.HegartyScaliaFuneralHome.com

William Scaggs, 89 of Old Bridge, New Jersey passed away on Thursday, May 3, 2018. Born Friday, April 5, 1929 in Springfield, Illinois. William would graduate from High School and go on to join the United States Air Force. He would serve... View Obituary & Service Information

The family of William Scaggs created this Life Tributes page to make it easy to share your memories.

Send flowers to the Scaggs family.