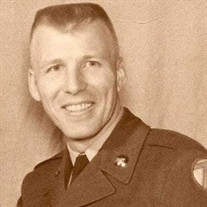 William Rankin, 94 of Old Bridge, New Jersey passed away on Saturday, November 20, 2021, at the Raritan Bay Medical Center in Old Bridge. Born Sunday, October 23, 1927 in Frostburg, Maryland, William was the son of the late William and Ada Rankin. Raised in Maryland, William would join the United States Navy, and then transfer to the United States Army. He served his country honorably and received his discharge after 13 years of service. William would marry the love of his life, Virginia. The couple would start a family and move to different communities during William's service. They lived in Georgia, Alaska, Japan, and Brooklyn, before settling in Old Bridge in 1961. William worked as a chemist for Premium Plastics in East Brunswick, he also spent time bartending at the Brooklyn Navy Yard for more than a decade. In his spare time he enjoyed shooting pool. He will be missed by all those that loved him. William is predeceased by his beloved wife of nearly 53 years Virginia, his loving daughter Laurie Ann Lewis, his 6 sisters and his parents. William is survived by his sons, William and his wife Maria, Blane, Bryan and Bruce, by his grandchildren, Bruce, Daniel, Bryan, Keith, Jennifer, Anthony, Christine, Theresa Rankin, Theresa Lewis, Candace, and Courtney and by his great grandchildren Karisa and Wenonah, and by his son in law Frank Lewis. Services will be private.

The family of William Rankin created this Life Tributes page to make it easy to share your memories.

Send flowers to the Rankin family.