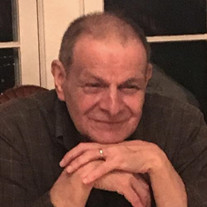 William Anthony Basso, 79 of Manalapan, New Jersey passed away on Tuesday, June 27, 2017, at Columbia Presbyterian Hospital in New York. Born February 24, 1938 in Brooklyn, New York to the late William and Adelina Basso, William was raised in Brooklyn and always had a passion for art. He attended the High School of Art and Design in Manhattan, and Pratt Institute in Brooklyn. Art school is where William would meet his wife Marie, and they married in 1959. In 1968 William and Marie would move to Manalapan, where they raised their family together and lived for the next 49 years. William was an illustrator for children's books and former employers include Colorforms Toys, Scholastic Publications and Boys Life Magazine. William was also a member of the Society of Illustrators. In his down time, he enjoyed gardening, landscaping and photography. William is survived by his wife of 57 years Marie; by his son William Basso Jr., his son James Basso and his wife Wei Fei, and his daughter Marie Louise Basso; by his four grandchildren Marco and Stefano D'Agostino and Thomas and Emma Basso; and by his many loving nieces, nephews and in-laws. The family will receive friends from 2:00 PM to 4:00 PM and 7:00 PM to 9:00 PM on Friday, June 30, 2017, at Michael Hegarty & John Vincent Scalia Home For Funerals, 3377 US Highway 9, Old Bridge, NJ 08857. A Roman Catholic mass will take place on Saturday, July 1, 2017 at 10:00 AM at St. Gabriel's Historic Church, 549 County Road 520, Marlboro, NJ 07746. Entombment will be in St. Gabriel's Cemetery, Marlboro, NJ. In lieu of flowers, contributions may be made to the Frattini Laboratory Research Fund at Columbia University Medical Center, payable to the Trustees of Columbia University and indicating Frattini Lab Research Fund, sent to: CUMC Development Office Attn: Rebecca Solinsky 516 West 168th Street, 5th Floor New York, NY 10032 Online condolences may be made to the family at www.HegartyScaliaFuneralHome.com

The family of William Anthony Basso created this Life Tributes page to make it easy to share your memories.

Send flowers to the Basso family.