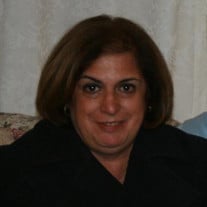 Vincenza J Dingaro, 68 of Old Bridge, New Jersey died on Wednesday, March 14, 2018, at Robert Wood Johnson University Hospital in New Brunswick, New Jersey. Born Saturday, July 30, 1949 in Brooklyn, New York she was the daughter of the late Jimmie and Fannie Falcone. Jennie as she was so affectionately known was a graduate of Sheepshead Bay High School in Brooklyn. Jennie would move to Staten Island where she would raise her children. She continued to reside there until 5 years ago when she moved to Old Bridge. Jennie worked as a claims assistant for AIG, she worked in Lower Manhattan until the events of 9/11, and then relocated with the company to Jersey City, NJ until her retirement. Jennie enjoyed trips to Atlantic City, as well as going to the Old Bridge Senior Center. Her love was her family, especially her grandchildren. She will be missed by all who loved her. Jennie is survived by her loving sons, Christopher Dingaro, and Paul Dingaro and his wife Jessica, by her cherished grandchildren, Christian, Skyla, and Juliana, by her caring sister Augusta Hillenbrand and her husband John, and by her loving nephews and niece, John Hillenbrand, James Hillenbrand, and Valene Hillenbrand. A Funeral Mass will be held at 10:30 AM on Monday at St. Ambrose Church located at 81 Throckmorton Ln Old Bridge, New Jersey 08857. The family will receive friends from 2:00 PM to 7:00 PM on Sunday, March 18, 2018, at Michael Hegarty & John Vincent Scalia Home For Funerals and Cremation Service, 3377 US Highway 9, Old Bridge, New Jersey. Online condolences may be made to the family at www.HegartyScaliaFuneralHome.com

The family of Vincenza J Dingaro created this Life Tributes page to make it easy to share your memories.

Send flowers to the Dingaro family.