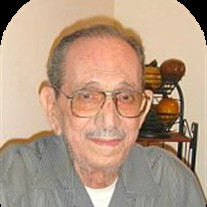 Valentino Falco, 93 of North Brunswick, New Jersey passed on Tuesday, April 25, 2017, at Robert Wood Johnson University Hospital in New Brunswick, New Jersey. Born December 7, 1923 to the late Julius and Matilda Falco, Valentino was a native of Staten Island before heading to New Jersey, first in Old Bridge in 1983, then settling in North Brunswick in 2002. Valentino was a Army Veteran of World War II, he served from 1942 - 1946 as a Sergeant in the Medic. Corp and was stationed in France and England. He was very proud of his Veteran status. He had many jobs when he returned from service, he was a supervisor at Willowbrook State School in Staten Island before his retirement. He was known to have a dry sense of humor and enjoyed playing horseshoes. Valentino was a devoted family man, was a master cook and showed his skills on the bbq. more than anything Valentino enjoyed the time spent with his family, he will be missed by all who knew and loved him. Valentino is predeceased by his beloved wife Marie, who passed in 1995. Surviving are daughter, Sandra Seymour, son, Jaymie Falco, siblings Rose, Larry and Peter, 7 grandchildren and 6 great grandchildren. Valentino is also predeceased by his siblings Gloria, Salvatore, Anita and Catherine. The family will receive friends from 2:00 PM to 4:00 PM and 7:00 PM to 9:00 PM on Friday, April 28, 2017, at Michael Hegarty & John Vincent Scalia Home For Funerals and Cremation Service, 3377 US Highway 9, Old Bridge, New Jersey. Interment will be in Holy Cross Burial Park, East Brunswick, NJ. on Saturday at 10:30am. Online condolences may be made to the family at www.HegartyScaliaFuneralHome.com

The family of Valentino Falco created this Life Tributes page to make it easy to share your memories.

Send flowers to the Falco family.