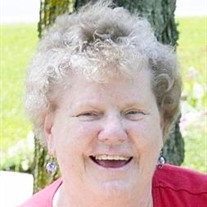 Trudy D'Errico, 85, formerly of Cranford, New Jersey passed away peacefully on Monday, November 8, 2021, at the Roosevelt Care Center in Old Bridge, New Jersey. Trudy was born Thursday, August 13, 1936, in Germany. At the age of 14, in 1950, Trudy would immigrate to the United States. She settled in Jersey City. In 1954 married the love of her life, Louis D'Errico Jr., the couple would live in Jersey City, and would raise their children there. Trudy was always very determined. Trudy would continue her education in her later years earning a GED. She worked her way to being the head custodian at Dickenson High School in Jersey City and was one of the state's first female Black Seal Fireman. Trudy was a member of the congregation at St. John's Lutheran Church, and also a longtime member of the Schuetzen Park Football Club of Union City. Trudy also was a member at the Deutsche Club in Cranford. In her spare time she enjoyed ballroom dancing with her good friend Ador, and her in-laws Al and Terry. She was known for making the best Eggplant Parmigianino. Around the holidays Trudy took the time to make her Christmas Cookies, often giving them out to friends and family. As she got older she made Lasagna instead, insisting that vodka sauce was better than marinara. She was a loving and caring woman who will be missed by all those that loved her. Trudy was predeceased by her beloved husband, Louis, by her cherished grandson Ian Riggi, and by her caring brothers who continued to live in Germany. Trudy is survived by her son Andrew D'Errico, her loving daughters Diane Wisely and her husband Rich, Irene D'Errico and her husband George Pateman, and by her cherished granddaughters Eva and Julia Riggi and their father Andrew Riggi, and several nieces and nephews, and brother-in-law Joe Minervini. The family will receive friends from 2:00 PM to 4:00 PM and 6:00 PM to 8:00 PM on Thursday, November 11, 2021, at Michael Hegarty & John Vincent Scalia Home For Funerals and Cremation Service, 3377 US Highway 9, Old Bridge, New Jersey. A Funeral service will be at 10:00 AM on Friday at Michael Hegarty & John Vincent Scalia Home For Funerals and Cremation Service located at 3377 US Highway 9 Old Bridge, New Jersey 08857. Entombment will be in Holy Cross Cemetery,, North Arlington, NJ. In lieu of flowers donations in Trudy's memory to the New Jersey Institute for Disabilities would be appreciated.

Trudy D'Errico, 85, formerly of Cranford, New Jersey passed away peacefully on Monday, November 8, 2021, at the Roosevelt Care Center in Old Bridge, New Jersey. Trudy was born Thursday, August 13, 1936, in Germany. At the age of 14, in 1950,... View Obituary & Service Information

The family of Trudy D'Errico created this Life Tributes page to make it easy to share your memories.

Send flowers to the D'Errico family.