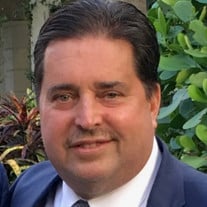 Thomas Robert Heck, 64, of Old Bridge, New Jersey passed away on Thursday, April 15, 2021 at the Jersey Shore University Medical Center. Born on June 27, 1956, Tom grew up in Kings Park, Long Island in a very close knit family alongside his parents, two sisters, Joan and Kathy, and brother, Rick. Tom’s hard-working nature began as a child where he played baseball, hockey, and obtained his first job at the Superior Ice Rink. In May of 1977, he graduated from SUNY Farmingdale where he proceeded to work for AT&T, Salomon Brothers, and his current job at Alliance Bernstein, working as a Telecom Engineer. No words could describe how special Tom was. He loved to be surrounded by his family and friends whom he always made smile and would always lend a hand to, no matter what. He was an energetic, loving, diligent man with a sense of humor like no other. His ultimate pride and joy were his wife and children; he was always so proud of them and their accomplishments. Being his children’s biggest fan, he made sure to attend every sporting event or dance recital. Tom also loved golfing, cars, rooting for the Mets, the ocean and spending time on his boats with his family. He frequently travelled to North Carolina to spend time with his parents and other family members. He was a wonderful caregiver to his elderly mother. Tom was predeceased in death by his father, Robert Charles Heck. Today, Tom is survived by his mother, Marilyn Ann Heck, and his beloved wife of 22 years, Ann Marie Heck, by his loving sons, Thomas Heck Jr. and wife, Kristina, Michael Heck, Andrew Heck and lovely daughter, Kaitlynn Heck, and by his new grandson, Thomas “Tripp” Heck III, as well as his siblings Kathlyn and Gerard Knight, Joan and Ignacio Quiros, and Richard Heck and Linda Farrell, along with many nieces and nephews, extended family, and many friends. A memorial mass is scheduled at 11:00AM on Thursday, April 29, 2021 at St. Ambrose Church located at 81 Throckmorton Road, Old Bridge NJ 08857.

The family of Thomas Robert Heck created this Life Tributes page to make it easy to share your memories.

Send flowers to the Heck family.