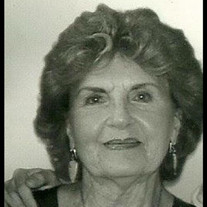 On Friday, January 14, 2022, our vibrant, wonderful, beautiful mother, grandmother, great-grandmother and aunt Theresa (Terry) DeCarolis of Old Bridge, New Jersey passed away in her sleep. Known to all as Terry, she was 92 when she left this world. Born in the Bushwick section of Brooklyn, New York, on December 27, 1929. She was the youngest of four children of the late Victor and Edna Listorti. Raised in Brooklyn, in 1946 Terry would meet and marry Harvey 'Bill' Trempe and have two sons, William 'Billy' and Michael. The couple would live in California until Bill's passing in 1952. After his death Terry moved back to Brooklyn to be close to her family. In 1955 Terry married Carl Leech and had three children, Marianne, Carlene and Carl. After Terry and Carl divorced in 1969, she met the love of her life, Mario 'Chic' DeCarolis and they married in 1973. The love and devotion they displayed to each other was the happily ever after they lived until Chic's death in 2007. Mom, Mommie or Ma (depending on which child was addressing her), was a devoted and loving mother who was always there for her children for everything. She was fun to be with, generous with her time and would do anything for her children. As Gram, Grammy, G-Ma or Red-headed Nana (again, whichever grandchild was addressing her) that is where she would shine. The sun would rise and set on her grandchildren. When spending time with Gram and Pop they were always the focus of their love and attention. Trips to Florida and other points of interest for them always included the grandchildren and there was no exception to this rule. The grandchildren loved them unconditionally as they loved them. But to her nieces and nephews she was affectionately known as Aunt Bubbles. A nickname she received when she was a child from her parents and a name that most appropriately fit her. She was younger in looks and attitude than her 92 years. Genetics played a part but in truth she took pride in her appearance and good care of herself. She relished the looks and compliments from people when they found out how old she was. 'You are how old??' would put the biggest smile on her face. In fact, she lived by herself until this past October 2021. She was also a good neighbor. Babysitting, driving neighbors to their doctor appointments were only some of the things that she would do. She loved music, travel, especially with family and she loved to read. She was big fan of the Outlander series both in book and television. She had a memory like a steel trap and could tell you the plot of a movie or book almost as if you had watched or read it yourself. She loved to cook and bake for family and friends. Parties at Terry and Chic's included great food, good wine and Sinatra on the stereo were always a big event and with every age group in attendance. An extraordinarily vibrant person who touched so many with her love, kindness and generosity. She will be deeply missed by all who loved her. Terry is predeceased by her husband's Bill Trempe and Mario De Carolis, and her son Billy Trempe and her siblings, Arline Page Poodiack, Dorothy Frost, and Victor Listorti. Terry is survived by her children, Michael Trempe and his wife Anna of Colchester, VT, Marianne Baggs and her husband John of Charlotte, VT, Carlene Weiss and her husband Bob of Old Bridge, NJ and Carl Leech of Moscow, Maine and her cherished grandchildren, Scott Trempe, Sean Baggs and his wife Kristen, Jake Baggs, Robert Weiss and his wife Patrice, and Paige Weiss her partner Andrew Gill and her twin great-grandchildren Zelda and Ripley Baggs. Terry is also survived by two nieces who meant the world to her, Carole Marshall and Doreen Page, her grand-nieces Kristin Moroz and Courtney Corkhill and by Debbie Hanlon, who Terry loved as a daughter. She is also survived by her three step-children from her marriage to Chic DeCarolis, Gary DeCarolis, Yvonne DeCarolis and Susan DeCarolis and Gary's three children, Emily, Alina and Sophie. A Memorial Gathering will be held on Saturday, January 22, 2022 between the hours of 12:00 PM and 4:00 PM at Michael Hegarty & John Vincent Scalia Home for Funerals and Cremation Service located at 3377 US Highway 9 Old Bridge, New Jersey 08857. In lieu of flowers please make a donation to the NJ Veterans of Foreign Wars Foundation, www.vfwnj.org and/or the Wounded Warrior Project https:support.woundedwarriorproject.org/donate, in memory of Terry.

On Friday, January 14, 2022, our vibrant, wonderful, beautiful mother, grandmother, great-grandmother and aunt Theresa (Terry) DeCarolis of Old Bridge, New Jersey passed away in her sleep. Known to all as Terry, she was 92 when she left this... View Obituary & Service Information

The family of Theresa DeCarolis created this Life Tributes page to make it easy to share your memories.