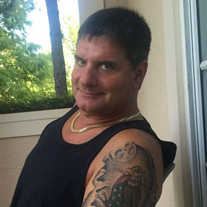 Terry Smith, 55 of Old Bridge, New Jersey passed away on Wednesday, April 8, 2020, at the Raritan Bay Medical Center in Old Bridge, New Jersey. Born Tuesday, May 12, 1964 in Bayonne, New Jersey, where he was raised. Terry would go on to graduate from Bayonne High School, before earning his Bachelor's Degree from Jersey City State College. It was in 1990 he would meet the love of his life, Susan Shivers. The couple knew they were meant for each other soon after meeting, and nine months later they were married. They would move to Old Bridge in 1993 where they raised their two sons. Terry was a loyal member of the Teamsters Local 863. He worked for Wakefern Food Corporation, in Elizabeth for 33 years. He gave 100% to the company and his coworkers. Terry was the First Shift Shop Steward in the Grocery Warehouse. He was on the front lines of the supply chain during this corona crisis and went the extra mile to ensure that all Shop Rite grocery stores were fully stocked with product and every Union member was represented. Even when he was feeling tired and wanted to rest he kept going because he knew people depended on him. He was that kind of selfless guy. Terry loved sports and music. He was a fan of the Yankees and the Giants. He enjoyed watching their games every chance he could. He was also a big fan of Pearl Jam. He attended every concert of theirs that he could and was a member of the fan club for many years. In his quiet time Terry could often be found watching YouTube videos for hours. He loved music videos, comedy clips, and concert footage. Terry loved enjoying a vanilla milkshake. He would go out on a late night snack run to pick one up and never forgot to get a treat for the rest of the family too. What Terry loved most of all was his family, traveling with them, and being around them. He was so proud of his sons. He will be missed by all those that loved him. He was the go-to guy of the family that never missed a birthday and made sure to show up at every life event and never made excuses. He was the rock of the family. Terry was the guy you called when you needed a godfather for your child or a prayer read before your wedding dinner. He went out of his way to make you feel comfortable & happy. He was a simple guy in a complicated world. If you were lucky enough to be part of his world you most likely considered him one of your best friends. He was the ultimate man of his word. Terry is survived by his beloved wife of 28 years, Susan, by his loving sons, Devin Shane, and Dylan Reid, by his loving parents, Al and Lucia Tarasiewicz, Raymond Smith, his caring siblings, Linda Smith, Linda Montelione, and David Tarasiewicz, and by his loving niece Andrea Perrelli; who along with his wife Susan, he helped raise and was a surrogate father to. Current funeral services will be private. The Smith family is planning a public memorial gathering to be announced at a future date.

The family of Terence Smith created this Life Tributes page to make it easy to share your memories.

Send flowers to the Smith family.