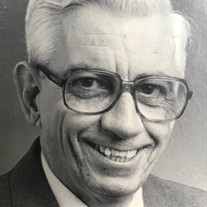 Terence Edmund Roche, 82, of Old Bridge, NJ passed on from this life to his eternal reward on July 9, 2016. Terence is survived by his beloved wife of 61 years Elsie (Jean), his four sons and their wives: Michael and Jeanne Roche of Freehold, Kevin and Sharon Roche of East Brunswick, Peter and Andrea Roche of Matawan, and Paul and Margaret Roche of Gurnee, Illinois; as well as 13 grandchildren and 1 great-grandchild. Terence was born in NYC in August 1933, the son of the late Richard and Marie Roche, and brother of the late Mary Roche. Terry was proud of his Irish Catholic heritage. He grew up in the Washington Heights neighborhood of Manhattan, graduated from the Incarnation School and All Hallows High School in the Bronx. Terry enlisted in the U. S. Navy, serving from 1952-60, including a tour on the USS Block Island escort carrier (CVE-106) where he served as a radio operator on amphibious aircraft in Patrol Squadron VP-34. After completing his tour of duty in the Navy, Terry moved the family to Old Bridge, NJ in 1960 and worked as a cost analyst for Bell System/AT&T for 32 years. Terry was a devout Catholic and founding parishioner of St. Ambrose Parish in Old Bridge, NJ for the past 56 years where he served as a Eucharistic minister and minister to the sick at Old Bridge Regional Hospital/Raritan Bay Medical Center. Terry also taught religious education/CCD/RCIA to children and adults at St. Ambrose for 49 years. Terry was an inspiration to his family, his fellow parishioners, and all those he taught and ministered to. Eternal rest grant unto him, O Lord, and let perpetual light shine upon him. May he rest in peace. The family will receive friends from 2:00 PM to 4:00 PM and 7:00 PM to 9:00 PM on Tuesday, July 12, 2016, at Michael Hegarty & John Vincent Scalia Home for Funerals and Cremation Service, 3377 US Highway 9, Old Bridge, New Jersey. A Mass of Christian Burial will take place at 10:30 AM on Wednesday July 13, 2016 at St. Ambrose Church located at 96 Throckmorton Ln. Old Bridge, New Jersey 08857. Interment will be in Chestnut Hill Cemetery, East Brunswick, NJ.

Terence Edmund Roche, 82, of Old Bridge, NJ passed on from this life to his eternal reward on July 9, 2016. Terence is survived by his beloved wife of 61 years Elsie (Jean), his four sons and their wives: Michael and Jeanne Roche of Freehold,... View Obituary & Service Information

The family of Terence Edmund Roche created this Life Tributes page to make it easy to share your memories.

Terence Edmund Roche, 82, of Old Bridge, NJ passed on from this...

Send flowers to the Roche family.