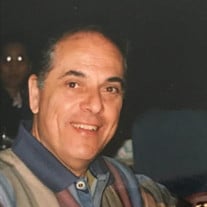 Stephen M. Colamonico, 83 of Old Bridge, New Jersey passed away on Tuesday, February 23, 2021, at Robert Wood Johnson University Hospital in New Brunswick, New Jersey. Born on May 10, 1937 in Brooklyn, New York, Steve was the youngest of six children, born to the late Diego and Carmela Colamonico. He grew up on Dahill Rd and Church Ave in the Kensington Section of Brooklyn. Steve lived down the block from his future wife, Anita Paleo, who he met when she was 15 and he was 17 years old. They both attended Erasmus Hall High School where he played baseball for all four years. Steve graduated in 1955 with a full baseball scholarship to Rider College. After graduating in 1959, he joined the Army Reserves where he served for six years. In 1960, Steve married Anita Paleo and then moved to Old Bridge, New Jersey in 1967, where they raised their three children. Once they started a life together in Old Bridge, Steve opened his own Seafood Company which he ran until his final days. Steve lived for his family and adored his grandchildren. He was a decade long member of the Old Bridge Rotary and held several seats on the board. In 1997, Steve joined a 60 and over men�s Softball League where he happily played until the age of 80, loving every minute of it, including his teammates. Steve was a loving man who will be missed by all that were blessed to be in his life. Steve is predeceased by his brothers Mike and Joe, sisters Rose Colamonico and Mary Chiovarelli, and grandson Michael Gill. Steve is survived by his beloved wife of 60 years Anita Paleo Colamonico, his son Stephen J. Colamonico and wife Debbie, daughters Nina Boyle and Patrice Dietrich, grandchildren Christina, Gina, Stephen, Stefani, Ava, and Michael and Sister Johanna Kvilesz and many nieces and nephews. A Mass of Christian Burial will take place on Tuesday March 9, 2021 at 11:00 AM at St. Ambrose Church. Interment will be in Chestnut Hill Cemetery, East Brunswick, NJ. A gathering of family and friends will take place on Monday March 8, 2021, between the hours of 4:00 PM and 7:00 PM at the Michael Hegarty & John Vincent Scalia Home for Funerals, 3377 US Highway 9 Old Bridge, NJ 08857

The family of Stephen Colamonico created this Life Tributes page to make it easy to share your memories.

Send flowers to the Colamonico family.