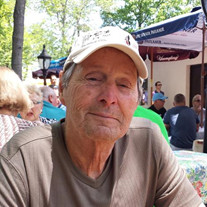 Mr. Stanley Scubelek, 74 of Jackson, New Jersey died on Sunday, February 12, 2017, at Centra State Medical Center in Freehold, New Jersey with his daughter and her boyfriend by his side. Born November 11, 1942 in Old Forge, Pennsylvania to the late Alexander and Edna Scubelek. Stanley moved to Old Bridge with his wife Carol in 1971. Together they would raise their family here. They were parishioners of St. Ambrose Roman Catholic Church, where Stanley was a member of the Knights of Columbus. Stanley worked his entire career at PSE&G in Newark, NJ and retired as a Supervisor. Stanley had a true love for the outdoors. He enjoyed spending time with his family on camping trips, vacationing and traveling with his late wife. He also enjoyed spending time hunting and fishing. Stanley was an active member of the Old Bridge Rifle Club. Stanley's beloved wife of 48 years Carol, passed away in 2012. Stanley is survived by his beloved children, Sharon Scubelek, and Stanley Jr. and his wife Julie, by his cherished grandchildren Stanley and Dylan, by his brothers, Albert and Frank, by his cousin Joanne Holle, and by his sister in laws Judy Fisher, Janice Benedetto, and Susan Benedetto. A Mass of Christian Burial will be held at 10:30 AM on Monday at St. Ambrose Church located at 96 Throckmorton Ln Old Bridge, New Jersey 08857. Entombment will be in Marlboro Memorial Cemetery, Morganville, NJ. The family will receive friends from 2:00 PM to 6:00 PM on Sunday, February 19, 2017, at Michael Hegarty & John Vincent Scalia Home For Funerals and Cremation Service, 3377 US Highway 9, Old Bridge, New Jersey. In lieu of flowers donations can be made in Stanley Scubelek's memory to the Alzheimer's Association online at Alz.org/donate or Donate by mail at Alzheimer's Association P.O. Box 96011 Washington, DC 20090-6011. Online condolences may be made to the family at www.HegartyScaliaFuneralHome.com

Mr. Stanley Scubelek, 74 of Jackson, New Jersey died on Sunday, February 12, 2017, at Centra State Medical Center in Freehold, New Jersey with his daughter and her boyfriend by his side. Born November 11, 1942 in Old Forge, Pennsylvania to... View Obituary & Service Information

The family of Mr. Stanley Scubelek created this Life Tributes page to make it easy to share your memories.

Send flowers to the Scubelek family.