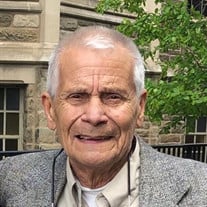 Russell W. Anderson, 79, of Marlboro, passed away on February 21, 2020, surrounded by his loving family. Russell was born on March 29, 1940 in Brooklyn, New York to Nils and Lillian Anderson. Growing up, he spent his summers in Laurence Harbor with his family, swimming, fishing, and crabbing. Upon graduating Manual Training High School in 1958, Russell proudly served his country in the United States Air Force, where he received an honorable discharge. On September 26, 1964, Russell married Virginia Erwin at Our Lady of Perpetual Help in Brooklyn, New York. The couple relocated to their home in Marlboro, New Jersey in 1966. When he was not working as a communications networking specialist, in his spare time, Russell could be found tending to his garden, riding his tractor or picking vegetables. Not only did Russell love his country, he was devoted to his community as a dedicated Scout Master of Troop 86, Marlboro Township, and an enthusiastic volunteer at the Special Olympics in New York. However, Russell's greatest commitment was to his family. Whether it was transforming the upstairs of his home to a gymnastics studio for his daughter, Wendy, decorating the walls with his daughter, Karen's artwork, or planning weekend camping and fishing trips with his sons, John and Paul, Russell dedicated his life to encouraging his children to pursue their passions. After his retirement from AT&T, Russell started his own company, Cable Management Services of New Jersey in 1990, where he worked until his retirement in 2019. Russell better known as "Tic Toc", was an incredibly proud grandfather to seven grandchildren and one great granddaughter. He was a devoted communicant of St. Thomas More Church in Manalapan, New Jersey. Russell was predeceased by: his parents, Nils and Lilian Anderson; and in-laws Hubert and Phyllis Erwin. He is survived by: his loving wife of 55 years, Virginia Anderson; his children, John Anderson and companion, Janet Sexton, Paul Anderson, Karen Christie and husband, Michael, and Wendy Hammond and husband, Spencer; his sisters, Sarah Colon and her husband, Daniel, and Kathleen Fobell and her late-husband, Ralph; his grandchildren, Lauren, Kaeleigh, Michael, and Richard Christie, and Alexis, Jarred, and Kyle Hammond; and his great granddaughter, Alycia Beauchard. He is also survived by his in-laws, Patricia Jedlowski, and the late Richard Jedlowski, Lorraine Erwin, Dorothyanne and Albert Drummer, and Phillip and Felicia Erwin; as well as many nieces and nephews. A mass of Christian burial will be held at 10:00 AM on Thursday, February 27, 2020, at St. Thomas More Church located at 186 Gordon's Corner Road, Manalapan, New Jersey 07726. The family will receive friends from 4:00 PM to 8:00 PM on Wednesday, February 26, 2020, at Michael Hegarty & John Vincent Scalia Home for Funerals, 3377 US Highway 9, Old Bridge, New Jersey 08857. Online condolences may be made to the family at www.HegartyScaliaFuneralHome.com

Russell W. Anderson, 79, of Marlboro, passed away on February 21, 2020, surrounded by his loving family. Russell was born on March 29, 1940 in Brooklyn, New York to Nils and Lillian Anderson. Growing up, he spent his summers in Laurence Harbor... View Obituary & Service Information

The family of Russell W Anderson created this Life Tributes page to make it easy to share your memories.

Russell W. Anderson, 79, of Marlboro, passed away on February...

Send flowers to the Anderson family.