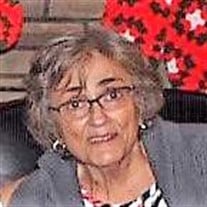 Rosemary A Bullen, 70 of The Villages, Florida passed away on Thursday, October 25, 2018, at her Daughter's Home in New Providence, New Jersey. Seventy years of faith and prayer provided its eternal reward as Rosemary was welcomed into heaven and reunited with the love of her life, Jerry. Born Monday, August 2, 1948 in Staten Island, New York, Rosemary was the youngest child and only daughter of the late Anthony and Rosemary Scalia. Rosemary grew up in the Westerliegh section of Staten Island's North Shore. As a young girl Rosemary loved walking down the street to the Westerliegh Tennis Club to play Tennis, a love she would share with her children later in life. Rosemary would attend St. Rita's Catholic School before going on to Port Richmond High School. It was in Port Richmond where she would meet Jerry. The two shared a love story that stretched more than 50 years, until his sudden passing in 2016. Rosemary and Jerry would marry in 1967 before being stationed in Heidelberg, Germany. While in Germany Rosemary would learn the basics of the German Language. That is where her first daughter was born. Upon returning to the United States they would settle in Port Richmond and that is where they would raise their family. Rosemary was very active in her children's lives, especially at Blessed Sacrament Church. She would teach religious education there for 15 years, she was President of the PTA, ran the holiday fair for a number of years, made palm crosses during the Lenten season, and was an active member of the St. Vincent De Paul Society. Rosemary was also a member of the Catholic Daughters Society, she often invited visiting priests into the home where they were treated like another member of her family. Rosemary enjoyed being with her family, she enjoyed summers at the family summer homes in Vermont and then the Poconos, where many life lasting memories were made. Rosemary worked for twelve years in a Family Florist in Eltingville. After retirement Rosemary and Jerry moved to Brick, NJ before again relocating to The Villages, FL. It was there that she became active in Operation Shoebox, and once again teaching religious education. She enjoyed being with friends in the bowling and bocce leagues. Rosemary enjoyed the vacations she took with members of the Buttonwood Bullies, a softball team that Jerry managed, as well as with many other vacations with lifelong friends, and family throughout her life. Rosemary also enjoyed playing the slot machines, in either Atlantic City, or on the Riverboat in Florida. She had many names, Scal, Rosemary, Roe, Mommy, Grammie, Mrs. B, and Aunt Roe, but no matter the name you knew her by, she loved you and she prayed for you, and for that she will be forever missed by all those that were blessed to have known her. Rosemary was predeceased by her beloved husband Jerry, by her loving parents, Anthony and Rosemary, and by her loving brothers, Anthony, and James, and by her mother in law and father in law, John and Nora Bullen. Rosemary is survived by her loving children, Rosemary Wilkinson and her husband Ray, Meredith Wawzycki and her husband Richard, and Jeremiah Bullen and his wife Tara, by her cherished grandchildren, John, Robert, Richie, Reagan, Megan, Madelyn, James, and Emma, by her caring brother John Vincent Scalia and his wife Ceil, by her caring sister in laws Doris Scalia, Roberta Scalia and Barbara Gattullo and her husband Robert, and by many loving nieces, nephews, and friends. A Mass of Christian Burial will be celebrated at 10:30 AM on Monday at Saint Ambrose Church located at 83 Throckmorton Ln Old Bridge, New Jersey 08857. The family will receive friends from 4:00 PM to 8:00 PM on Saturday, October 27, 2018, and Sunday October 28, 2017 at the Michael Hegarty & John Vincent Scalia Home For Funerals and Cremation Service, 3377 US Highway 9, Old Bridge, New Jersey. Online condolences may be made to the family at www.HegartyScaliaFuneralHome.com

Rosemary A Bullen, 70 of The Villages, Florida passed away on Thursday, October 25, 2018, at her Daughter's Home in New Providence, New Jersey. Seventy years of faith and prayer provided its eternal reward as Rosemary was welcomed into heaven... View Obituary & Service Information

The family of Rosemary A Bullen created this Life Tributes page to make it easy to share your memories.

Rosemary A Bullen, 70 of The Villages, Florida passed away on...

Send flowers to the Bullen family.