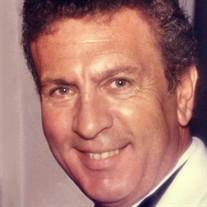 Roger W. Morin, Sr., 83 of Lakewood, New Jersey passed away on Thursday, April 18, 2019, at Ocean Medical Center in Brick, New Jersey. Born Thursday, July 4, 1935 in Newark, NJ, Roger was the son of the late Douglas and Emma Morin. Roger was raised in Irvington and would go on to graduate from Irvington High School. It was during his high school years when he would meet the love of his life, Marie Ruggiano. Soon after high school Roger would join the United States Navy, he served his county Honorably. Soon after the couple would marry and start their family. Eventually moving to Old Bridge, where they lived for 45 years. During that time Roger worked as a manager in the automotive service industry. He was always active in sports and would take those talents to coaching his son's baseball team. He enjoyed rooting for his favorite sports teams, the Dallas Cowboys, Boston Celtics, and Cincinnati Reds. He will be missed by all those that were blessed to have had him in their lives. Roger is survived by his beloved wife of 62 years, Marie, by his loving children, Roger Jr. and his wife Elizabeth, and Kim Morin, and her fiance' Todd Wilson, and by his cherished grandchildren, Derek and Amanda Morin. The family will receive friends for a Memorial Visitation from 1:00 PM to 4:00 PM on Saturday, April 20, 2019, at Michael Hegarty & John Vincent Scalia Home For Funerals and Cremation Service, 3377 US Highway 9, Old Bridge, New Jersey. In lieu of flowers donations may be made to the American Lung Association. Private Interment at Brig. General William C. Doyle Cemetery will take place next week. Online condolences may be made to the family at www.HegartyScaliaFuneralHome.com

The family of Roger W Morin, Sr. created this Life Tributes page to make it easy to share your memories.

Send flowers to the Morin family.