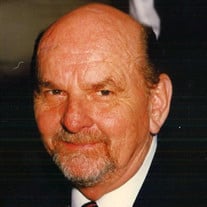 Robert J Young, 91 of Old Bridge, New Jersey died peacefully on Monday, November 6, 2017, at Haven Hospice in Edison, surrounded by his loving family. Born Saturday, January 23, 1926 in the Bronx, New York, Robert was one of four children born to the late George and Jennie Young. Robert [Bob and Dad as we all knew him] grew up in the Bronx attended Evander Childs High School. During his time in High School Robert was on the swim team, it was a leisure activity he would enjoy for years to come. Robert was a proud veteran of the United States Army during World War II. Dad joined the Army and within a short period of time after training found himself stationed on Okinawa during D-Day.This was an important moment in his life which he actually talked very little of until his children became older. But in his senior years he would recount each day there with great detail to us his children always staying extremely interested in his beloved country's past. Upon returning from WW II, Robert[dad] would seek out the love of his life the former Cecelia Marie Burns. And after a struggle of convincing our Grandma Burns he was worthy of her daughter the two would marry in April of 1948. Their first son was born in April of 1949 and they started to raise him in an apartment just down the street from St. Brendan's Church close to Grandma and Grandpa Young's and Grandma Burns. They began raising their 8 children in the Bronx. It was in 1960 our Mom and Dad decided they wanted to raise their family in a house in a more country like setting and the family would relocate to Old Bridge, New Jersey. Over the next 57 years Robert worked as an Accountant at the Movie Lab company and Pathe Lab in the city. He would often have the opportunity to screen movies before they were in the theater and the family backyard became the theater for many of the kids in the neighborhood. Robert was a member of the St. Thomas the Apostle Knights of Columbus, and also taught Religious Education at St. Ambrose. In his spare time Robert[Bob] enjoyed Fishing, Archery, and Pistol Target Shooting and he and his wife Cecelia were avid Yankee fans. Robert also enjoyed planting and spending time in the garden, as well as Jet Skiing, Scuba Diving, and Catamaran Sailing in his senior years. Dad turned a baron lot of land into a Botanical Garden of course with the help of his little army of kids. Then there were always dads pets. Dad always had a place in his heart for his/our animal friends who ranged from his beloved dogs to parakeets, parrots, turtles and tropical fish always there for us to play with and marvel at. Most of all Robert [dad] enjoyed being with his love Cecelia and his family. There was always something he had planned for the weekends whether it be picnics, trips to Sparkle Lake, Bar-b-q's with the kids and our grandparents or dive bombing us in the pool. Many nights dad would come home tired from work but he somehow found the energy to put on the record player and dance with my mom around the living room and then allowing all of us kids to stand on his feet so he could dance us around the room. Robert our dad dedicated his life to his family and will be deeply deeply missed by all who loved him. Robert is survived by his loving children, Dr. Robert James Young and his wife Lucille, Lorraine Buckler and her husband Jimmy, Thomas Young and his wife Peggy, Teresa Pape and her husband Paul, and Nancy Kennedy and her husband Mark, by his caring sister Jane Tiernan and her husband Frank, by his cherished grandchildren, Erin, Lauren, Ryan, Courtney, Jaquelyn, Ashleigh, and Chelsea, and by 8 cherished great grandchildren. Robert was predeceased by his beloved wife of 64 years Cecelia, by his loving children, Christopher Young, John Young, and Douglas Young, and by his caring brothers, Raymond Young, and George Young. A Funeral service will be at 10:00 AM, prayer service at 11 on Friday at Michael Hegarty & John Vincent Scalia Home For Funerals located at 3377 US Highway 9 Old Bridge, New Jersey 08857. Interment will be in Forest Green Memorial Park, Morganville, NJ. The family will receive friends from 7:00 PM to 9:00 PM on Thursday, November 9, 2017 for a viewing and celebation of our dads life at the Michael Hegarty & John Vincent Scalia Home For Funerals at 3377 US Highway 9, Old Bridge, New Jersey. Online condolences may be made to the family at www.HegartyScaliaFuneralHome.com

The family of Robert J Young created this Life Tributes page to make it easy to share your memories.

Send flowers to the Young family.