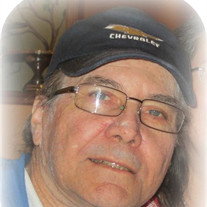 Robert 'Bob' Szeles, 65 of South Amboy, New Jersey died on Wednesday, August 17, 2016, at Raritan Bay Medical Center - Perth Amboy. Born Friday, February 23, 1951 in Summit, New Jersey.He was the son of the late Frederick and Florence Szeles. After graduating high school Bob went onto Kean University where he was a member of the Nu Delta Pi Fraternity. Upon graduation Bob began a career in Education. He was a high school teacher at the Elizabeth High School for 34 years, teaching Biology. Bob had a passion for the Revolutionary War and he loved taking part in reenactments. He was a member of the Colonel Ogden's 1st New Jersey Regiment, the German Regiment, and the Middlesex County Militia. On trips to Williamsburg Virginia he would volunteer at the various reenactments there. Bob also enjoyed camping and vacations in Hawaii and Disney World. During all these times he had the love of his life by his side, his wife of 31 years, Janice Benedetto. Bob will be missed by all who knew him. Bob is survived by his beloved wife Janice, his brother Frederick Szeles and wife Susan, his sister in-laws Susan Benedetto, and Judith Fisher, and brother in-law Stanley Scubelek, his cousin Gale McCoy, and many loving nieces and nephews. A Funeral service will be at 11:00 AM on Monday at Michael Hegarty & John Vincent Scalia Home For Funerals and Cremation Service located at 3377 US Highway 9 Old Bridge, New Jersey 08857. Interment will be in Old Tennent Cemetery, Manalapan, NJ. The family will receive friends from 2:00 PM to 6:00 PM on Sunday, August 21, 2016, at Michael Hegarty & John Vincent Scalia Home For Funerals and Cremation Service, 3377 US Highway 9, Old Bridge, New Jersey. The family asks that donations be made to the Juvenile Diabetes Research Association or the National Kidney Foundation, in Bob's memory. Online condolences may be made to the family at www.HegartyScaliaFuneralHome.com

The family of Robert Szeles created this Life Tributes page to make it easy to share your memories.

Send flowers to the Szeles family.