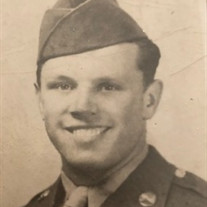 Robert L Swenton, 96 of Manchester, New Jersey passed away on Monday, December 7, 2020, at home. Born June 19, 1924 in Olyphant, Pennsylvania, Robert was the middle child of 10 children born to the late Walter and Frances Swenton. Robert was raised in the coal counties of Pennsylvania. He was a star athlete in High School where he played football and baseball, and was signed after high school to play semi pro baseball. Soon after he was drafted into the United States Army to serve the country during World War II. Robert served his years in the Pacific Theatre of the war on the front lines. During his service in the Battle of Okinawa, Robert, while under heavy enemy mortar fire crawled on his belly to save the lives of several wounded soldiers, bringing them to safety. For this act of heroism, he was awarded the Bronze Star. It was during a visit home, prior to heading off to the Pacific, he would meet the love of his life, Ida D'Amico. They would continue to write to each other during Robert's time in the war, and soon after his return from service they would marry. They would start a family of their own and live in South Plainfield for 52 years. Robert was active in his community, as a Little League coach, and parishioner of Sacred Heart Church. Robert worked as a manager for the A&P Tea Company until 1962, he was then a manager at Shop Rite Liquors, before working as a Salesman for the Hershey Company, retiring in 1992. Robert and Ida would eventually move to Manchester, NJ in 2003. Robert enjoyed sports, and spending time on the golf course. He was a loving man who will be missed by all those that were blessed to have him in their lives. Robert was predeceased by his son in law Harold Berman. Robert is survived by his beloved wife of 73 years, Ida, by his loving children, Susan Berman, and Patricia Whelan and her husband Dennis, by his cherished granddaughter Stacey Lynn Schulman and her husband Alan, adored great grandchildren, Jacob Robert and Julian Michael, and caring siblings, William, Bernard, Dolores, Leon, and Alberta, A Mass of Christian burial will be held at 10:30 AM on Friday, December 11 at St Ambrose Church located at 83 Throckmorton Ln Old Bridge, New Jersey 08857. Interment will be in Resurrection Cemetery, Piscataway, NJ. Because of the COVID pandemic, the family will have a private viewing on Wednesday evening; and will refrain from hosting a repast for the well-being and safety of all. A Memorial Dinner will be held at a later date. Family and friends are invited to attend the funeral mass on Friday morning, 10:30 a.m. at St. Ambrose Parish, 83 Throckmorton Lane, Old Bridge and Interment service at Resurrection Cemetery, Piscataway, N.J. Online condolences may be made to the family at www.HegartyScaliaFuneralHome.com

Robert L Swenton, 96 of Manchester, New Jersey passed away on Monday, December 7, 2020, at home. Born June 19, 1924 in Olyphant, Pennsylvania, Robert was the middle child of 10 children born to the late Walter and Frances Swenton. Robert was... View Obituary & Service Information

The family of Robert L Swenton created this Life Tributes page to make it easy to share your memories.

Robert L Swenton, 96 of Manchester, New Jersey passed away on...

Send flowers to the Swenton family.