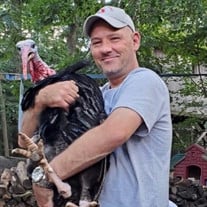 Robert William Manvell, 46 of Sayreville, New Jersey passed away on Tuesday, January 18, 2022.. Born Monday, February 3, 1975 in Elizabeth, NJ, Robert was the son of William Carl Manvell and the late Brenda Ann Manvell. Robert was raised in Linden, NJ. He would go on to graduate from Linden High School. He worked as a heavy machine operator for Covanta in Rahway, NJ. In 2008 Robert would marry the love of his life, Nicole Geraghty. The couple would settle in Sayreville, NJ and raise their daughter Brooklyn Catherine there. Robert enjoyed riding motorcycles, and going fishing. But he loved spending time with his wife Nicole and daughter Brooklyn the most. Brooklyn and Rob loved going fishing together just being silly and laughing. Robert was predeceased by his mother Brenda Ann, and by his cousin Matthew Auer. Robert is survived by his beloved wife, Nicole, by his loving daughter Brooklyn Catherine, by his father William, by his sister Shannon Smith and husband Francis, by his father in law Buddy Geraghty and wife Ilene, by his mother in law Sheryl Geraghty and husband Spyros Zaloumes, by his sister in law Tricia Bauer and husband Jon, by his nephew and nieces Cross, Jenna Alexa, and Karleigh Nicole, by his best friend who was more like a brother Sherif Elbayar, and by his Aunts, Uncles and many cousins. The family will receive friends from 4:00 PM to 8:00 PM on Monday, January 24, 2022, at Michael Hegarty & John Vincent Scalia Home For Funerals and Cremation Service, 3377 US Highway 9, Old Bridge, New Jersey. A Funeral service will be at 11:00 AM on Tuesday at Michael Hegarty & John Vincent Scalia Home For Funerals and Cremation Service located at 3377 US Highway 9 Old Bridge, New Jersey 08857. Interment will be in Holy Cross Burial Park, East Brunswick, NJ.

The family of Robert William Manvell created this Life Tributes page to make it easy to share your memories.

Send flowers to the Manvell family.