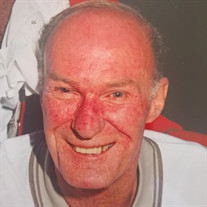 Robert Berry, 82 of Sayreville, New Jersey passed away on Monday, August 6, 2018, at JFK Medical Center in Edison, New Jersey. Born Tuesday, March 3, 1936 in Coaldale, Pennsylvania, Robert was the son of the late Iver and Margaret Berry. Robert would move to Elizabeth, NJ at a young age, and would go on to graduate from Jefferson High School. Robert would meet the love of his life, his wife Carole, and the two would start their family. Robert joined the United States Army, he would serve his country honorably, stationed in Fort Benning, Georgia. They would move to Cooperstown, NY, and remain there until 1981, moving to Old Bridge, NJ. Robert worked as a plant supervisor for US Gypsum in Clark, NJ. Robert was an avid cruiser, and was a fan of all sports, he especially enjoyed rooting for his favorite teams the Green Bay Packers, the NY Yankees, and the Philadelphia Flyers. He was everyone's friend, and will be missed by all those who were fortunate to have known him. Robert was predeceased by his parents, Iver and Margaret Berry, his wife of 52 years Carole, and by his brother Iver Berry. Robert is survived by his loving children, Arlene McCaffrey and her husband John, Bob Berry, Ronald Berry, Richard Berry and his wife April, and Raymond Berry and his wife Kim. He was also loved by his cherished grandchildren, Alesa Hosking, William Mongold, Victoria Mongold-Reed, Christina Purdie, Patrick Finan, Shannon Berry, Richard Berry, Tyler Berry, and Danielle Berry, and 9 adoring great grandchildren. In lieu of flowers donations can be made in Robert's memory to the Wounded Warrior Project. https://support.woundedwarriorproject.org A funeral service will be at 10:30 AM on Friday, August 10, 2018 at Brig. General William C Doyle Veterans Cemetery located at 350 Province Line Road Wrightstown, New Jersey 08562. Interment to follow. The family will receive friends from 6:00 PM to 9:00 PM on Thursday, August 9, 2018 at Michael Hegarty & John Vincent Scalia Home For Funerals and Cremation Service, 3377 US Highway 9, Old Bridge, New Jersey.

The family of Robert Berry created this Life Tributes page to make it easy to share your memories.

Robert Berry, 82 of Sayreville, New Jersey passed away on Monday,...

Send flowers to the Berry family.