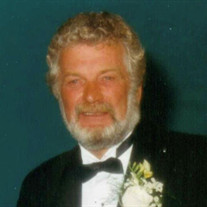 Richard A. Wickberg, 83 of Old Bridge, New Jersey passed away on Tuesday, January 15, 2019, at The Venetian Nursing Home in South Amboy, New Jersey. Born August 7, 1935 in Perth Amboy, New Jersey. Richard also known as Dick by his beloved family, was the President of Wickberg Marine in Belford, NJ. He was married to Joanne (nee) Murphy for 23 years. Richard was predeceased by his son Darren, and by his brothers Arthur E, Robert A., and William R. Wickberg. Richard is survived by his wife Joanne, his son Richard B. Wickberg, his step-daughter Tracy Arce, 5 grandchildren and 5 great grandchildren In lieu of flowers the family requests donations be made in Richard's memory to the Parkinson's Foundation at https://parkinson.org/ways-to-give A mass of Christian burial will be held at 10:00 AM on Monday at St. Rose of Lima Church located at 16 Mc Lean Street Freehold, New Jersey 07728. Interment will be in St. Rose Lima Cemetery, Freehold, NJ. The family will receive friends from 1:00 PM to 3:00 PM and 5:00 PM to 7:00 PM on Sunday, January 20, 2019, at Michael Hegarty & John Vincent Scalia Home For Funerals and Cremation Service, 3377 US Highway 9, Old Bridge, New Jersey. Online condolences may be made to the family at www.HegartyScaliaFuneralHome.com

The family of Richard A. Wickberg created this Life Tributes page to make it easy to share your memories.

Richard A. Wickberg, 83 of Old Bridge, New Jersey passed away...