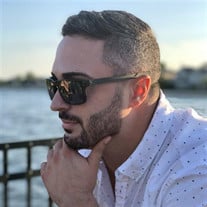 Richard F Santora, 28 of Marlboro, New Jersey passed away suddenly on Thursday, July 25, 2019, at his home. Born Saturday, April 27, 1991 in Red Bank, New Jersey, he was the son of Frank and Sharon Santora. Richard was raised in Marlboro. He would go onto graduate from Marlboro High School. After High School Richard attended Farleigh Dickenson University, graduating with his Bachelors Degree. Richard played football both at Marlboro High School and at FDU. In January of 2018 Richard decided to serve his country and joined the United State Air Force. He was an Active Duty USAF Airman First Class, serving in the 108th Wing of the Air National Guard at the time of his passing. Richard was extremely proud of his continued service to his country and so was his family. In his spare time Richard enjoyed playing challenging games, playing Volleyball at St. Gabriel's Church, and spending time with his family, including his 3 dogs, Tyson, Sammi, and Casey. Richard was a loving and caring man, he will be missed by all those that loved him. Richard is survived by his beloved parents, Frank and Sharon Santora, by his caring sister, Nicole Santora, and caring brother, Michael Santora, and by his 3 loving companions, Tyson, Sammi, and Casey. A Mass of Christian Burial will take place on Thursday at, St. Gabriel's Church, at 10:00 AM, located at 100 N. Main St. Marlboro, NJ 07746. Entombment at St. Gabriel's Cemetery to follow. The family will receive friends from 4:00 PM to 8:00 PM on Wednesday, July 31, 2019, at Michael Hegarty & John Vincent Scalia Home For Funerals and Cremation Service, 3377 US Highway 9, Old Bridge, New Jersey. In lieu of flowers the family asks that donations to the Wounded Warriors Project are made in Richard's memory. Online condolences may be made to the family at www.HegartyScaliaFuneralHome.com

Richard F Santora, 28 of Marlboro, New Jersey passed away suddenly on Thursday, July 25, 2019, at his home. Born Saturday, April 27, 1991 in Red Bank, New Jersey, he was the son of Frank and Sharon Santora. Richard was raised in Marlboro.... View Obituary & Service Information

The family of Richard F Santora created this Life Tributes page to make it easy to share your memories.

Send flowers to the Santora family.