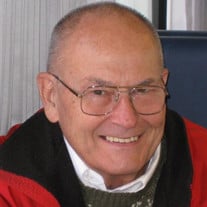 Richard C Rutishauser, 79 of Old Bridge, New Jersey, passed away on Monday, August 13, 2018, at Roosevelt Care Center in Old Bridge surrounded by his loving family. Born Friday, October 14, 1938 and raised in Jersey City, New Jersey, he was the son of the late Richard and Veronica Rutishauser. He served his country honorably in the United States Air Force as an Air Policeman. He graduated from Rutgers with a degree in Marketing and worked a long career with Goodyear serving as a location manager opening new dealerships. In 1965 Richard married Anna Adkins. The family relocated to Newark, Sayreville, and then Old Bridge where they lived for the past 44 years. Richard was a loving Christian man who selflessly served and cared for others. He delighted in the simple things in life - a good meal and rooting for his favorite football team, the NY Giants. He enjoyed spending time in the ocean, especially on a boat or Jet Ski. More than anything, Richard loved being with his family and will be missed terribly by all those who loved him. Richard is survived by his beloved wife of 53 years, Anna, by his loving children, W. Pete Rutishauser and his wife Michele, and Karen Dawn Roman and her husband Dan, by his cherished grandchildren, Brant Rutishauser and Joseph Roman, and by his caring sister, Carole Tevis. The Family will receive friends for a memorial visitation from 4:00 PM to 8:00 PM on Monday, August 20, 2018 at the Michael Hegarty & John Vincent Scalia Home for Funerals and Cremation Service located at 3377 US Highway 9 Old Bridge, New Jersey 08857. A Funeral service will be held at 10:30 AM on Tuesday, August 21, 2018 at the same location. The Family requests that in lieu of flowers donations be made to the Alzheimer's Foundation in Richards's memory. https://alzfdn.org/support-us/donate/

The family of Richard C Rutishauser created this Life Tributes page to make it easy to share your memories.

Send flowers to the Rutishauser family.