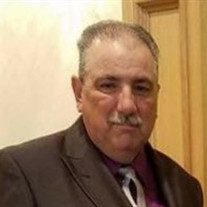 Richard Naso, 69 of Old Bridge, New Jersey passed away, peacefully after a long illness, on Wednesday, October 21, 2020, at home surrounded by his family. Born Wednesday, October 10, 1951 in Queens, New York, he was the son of the late Richard and Angelina Naso. Richard was a graduate of Thomas Edison High School in Jamaica Queens. At the age of 21 he would move to central New Jersey. Richard worked for Air Express International as a warehouseman and also a tractor trailer driver. It was there he would meet the love of his life, Gloria Taormina. The couple would eventually marry and move to Spotswood. They also lived in Monroe and that is where they would raise their son, Richard. Six years ago the family moved to Old Bridge. Richard was an avid sports fan, especially following his favorite teams, the NY Jets, Mets, and Rangers. He was a certified Basketball Referee and Baseball Umpire. Richard could be found on many different basketball courts and baseball fields throughout Monroe and Central New Jersey. In his spare time he enjoyed getting out for a round of golf, and also spending time with friends at the Monmouth Race Track. He was a caring man who will be missed by all those that were blessed to have him in their lives. Richard was predeceased by his parents, Richard and Angelina Naso, and his brother Paul Naso. Richard is survived by his beloved wife of 32 years, Gloria, by his loving son Richard, by his sisters-in-law and brothers-in-law, Rosemary and John Barbato, Valerie and Edward Timmons, Donna Naso and many nieces and nephews. A Funeral Mass will be held at 10:00 AM on Monday at St. Clements Church located at 172 Freneau St Matawan, New Jersey 07747. Interment will be in Holmdel Cemetery, Holmdel, NJ. The family will receive friends from 1:00 PM to 3:00 PM and 6:00 PM to 8:00 PM on Sunday, October 25, 2020, at Michael Hegarty & John Vincent Scalia Home For Funerals and Cremation Service, 3377 US Highway 9, Old Bridge, New Jersey. Online condolences may be made to the family at www.HegartyScaliaFuneralHome.com

Richard Naso, 69 of Old Bridge, New Jersey passed away, peacefully after a long illness, on Wednesday, October 21, 2020, at home surrounded by his family. Born Wednesday, October 10, 1951 in Queens, New York, he was the son of the late Richard... View Obituary & Service Information

The family of Richard Naso created this Life Tributes page to make it easy to share your memories.

Send flowers to the Naso family.