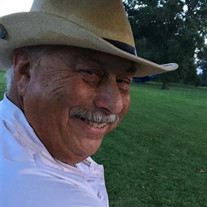 Richard W. Meyers, 75 of Old Bridge, New Jersey passed away on Thursday, January 27, 2022, at his home surrounded by his loving family. Born Sunday, May 26, 1946 in Brooklyn, New York, he was the son of the late Solomon and Jean Meyers. Richie, as he was known to his family and friends, was a graduate of Tilden High School. He also graduated with a Bachelor's Degree from Long Island University. Richie served his country honorably in the United States Army Reserve and earned his Honorable Discharge. Richie would go on to a long career in Insurance. Eventually opening his own Insurance Agency, the Park Slope Insurance Agency, with offices in Brooklyn and Staten Island. He would remain active in the insurance industry, even after his retirement. Richie lived in Brooklyn and also Staten Island, before settling in Old Bridge in 1994. Richie was a member of the Ben-Bay Kiwanis Club. Richie loved to be out on the Golf course, and enjoyed playing any chance he had. He was especially proud of his two holes-in-one. He also enjoyed going to estate sales and yard sales, and treating himself to chocolates when he could. Richie had a sarcastic sense of humor, and a heart of gold, and would do anything for anyone, always looking to help people out. He was a caring man who will be missed by all those that love him. Richie is survived by his beloved wife of 35 years, Janice Dorniak Meyers, by his caring children, Bonnie Cohen and her husband Robert, and Spencer Meyers and his fiance Mallory LoPresti, by his caring brothers Lanny and his wife Marian Schiavo, and Kenneth and his wife Susan, by his cherished granddaughter Jacqueline Cohen, and by many cousins, nieces, and nephews. A funeral service will take place on Monday at 12:30 PM at Woodbridge Memorial Gardens, Woodbridge, NJ. Entombment to follow. Donations in Richie's memory may be made to a charity of your choice.

Richard W. Meyers, 75 of Old Bridge, New Jersey passed away on Thursday, January 27, 2022, at his home surrounded by his loving family. Born Sunday, May 26, 1946 in Brooklyn, New York, he was the son of the late Solomon and Jean Meyers. Richie,... View Obituary & Service Information

The family of Richard W Meyers created this Life Tributes page to make it easy to share your memories.