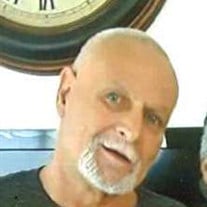 Richard J. Alexander, 68 passed away on Sunday, August 11, 2019, at Robert Wood Johnson University Hospital in New Brunswick, New Jersey. Born Saturday, September 23, 1950 in Brooklyn, New York, he was the son of the late James and Yolanda Alexander. Richard was born and raised in Brooklyn, NY. He would graduate from FDR High School. Richard joined the Army Reserves, and was Honorably Discharged. He would meet and marry, Josephine and the couple would move to Staten Island. Soon after they would settle in Old Bridge, NJ. His wife Josephine passed away soon after the family moved, but Richard would remain in Old Bridge to raise his children. Richard worked with the NYC Board of Education working in schools in Brooklyn. He was an HUGE NY Yankees fan, he also rooted for the NY Rangers, and NY Giants. What Richard loved the most was spending time with his children and grandchildren. He was a hard worker , a loyal friend and most importantly an amazing father and grandfather. Richard is survived by his loving children, Samantha Carrier and her husband Christopher, Cindy Vitale and her husband Lenny, and Ricky Alexander and his wife Annemarie, by his cherished grandchildren, Ashley, Leonardo, Christopher, Gianluca, Kayla, and Ryan, and by his caring brother James Alexander. A mass of Christian burial will be held on Wednesday, at 9:00 AM, at St. Thomas the Apostle Church, Old Bridge, NJ. Entombment to follow at St. Joseph Cemetery, Toms River, NJ. The family will receive friends from 1:00 PM to 3:00 PM and 6:00 PM to 9:00 PM on Tuesday, August 13, 2019, at Michael Hegarty & John Vincent Scalia Home For Funerals and Cremation Service, 3377 US Highway 9, Old Bridge, New Jersey. Online condolences may be made to the family at www.HegartyScaliaFuneralHome.com

The family of Richard J. Alexander created this Life Tributes page to make it easy to share your memories.

Send flowers to the Alexander family.