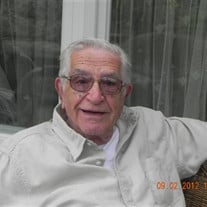 Ralph Martino, 96 of Old Bridge, New Jersey passed away on Friday, July 31, 2020, at the Raritan Bay Medical Center in Old Bridge. Born Monday, December 17, 1923 in Brooklyn, New York, he was the son of the late Antonio and Philomena Martino. Ralph was raised in Brooklyn, NY. After high school he would join the US Coast Guard, serving on the tall ship Danmark, training cadets. He earned an honorable discharge, returning home to his family. At the age of 19 Ralph would meet the love of his life, Olga Greco. The couple would eventually marry and start their own family in Brooklyn. The family would settle in Old Bridge in 1965. Ralph was trained in television and radio technology, worked as a foreman with Emerson TV & Radio & Eden Toys, both in Jersey City. Ralph was a gifted craftsman. He had a high level of talent for woodworking, creating and making Nutcrackers and making replicas of the Danmark to give to each of his children and grandchildren. He enjoyed spending time with his family, collecting coins, and also building model train layouts. Ralph was a loving man who will be missed by all those that were blessed to have had him in their lives. Ralph was predeceased by his parents, Antonio and Philomena Martino and by his father in law and mother in law, Andrew and Maria Stella Greco. Ralph is survived by his beloved wife of 72 years, Olga, by his loving children, Adrienne Martino Graff and her partner Steve, Phyllis Martino Germano and her husband Bob, Anthony Martino and his wife Susan, and Maria Martino Martemucci and her husband Jimmy, by his cherished grandchildren, Robert, Jason, Matthew, Michael, Patrick, Amanda, Jessica, Samantha, Anthony, and Alexandra, by his adoring great grandchildren, Kaeleigh, and Andrew, and by many loving nieces, nephews, and cousins. A Funeral Mass will be held at 10:30 AM on Monday at St. Ambrose Church located at 81 Throckmorton Ln Old Bridge, New Jersey 08857. Entombment will be in Marlboro Memorial Cemetery, Morganville, NJ. The family will receive friends from 1:00 PM to 6:00 PM on Sunday, August 2, 2020, at Michael Hegarty & John Vincent Scalia Home For Funerals and Cremation Service, 3377 US Highway 9, Old Bridge, New Jersey. Online condolences may be made to the family at www.HegartyScaliaFuneralHome.com

The family of Ralph Martino created this Life Tributes page to make it easy to share your memories.

Send flowers to the Martino family.