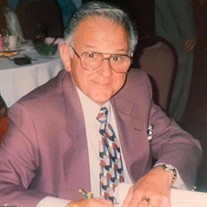 Raffaele Serpe (aka Ralph), 82 of Monroe Township, NJ passed away on Thursday, August 26, 2021, at the Geisinger Community Medical Center in Scranton, PA surrounded by his family. Born Thursday, October 6, 1938 in Brooklyn, NY, Ralph was the son of the late Sylvester and Rosalia Serpe. Ralph was raised in Brooklyn. He was a graduate of St. Francis High School and would also attend St. Francis College. He began his career in insurance soon after school, working for Royal Globe Insurance Company where he worked for over 40 years. It was during those early years he would meet the love of his life, Lauretta Gilbert. After meeting Lauretta, Ralph would join the United States Army. He served his country proudly, serving in Germany, and eventually earning his Honorable Discharge. When he returned home Ralph married Lauretta and the couple lived in Brooklyn. They would start a family of their own there before moving to Staten Island to continue raising their three daughters. After retirement Ralph and Lauretta moved to Monroe, NJ to be closer to their family. Ralph was active in his community as a volunteer. He gave his time to many causes including the Juvenile Diabetes Walk-a-thon, serving at soup kitchens, and collecting tabs for the Ronald McDonald House. Ralph also served on the St. Anns Father's Club, President of St. Peter's Girls High School Parents Club, and was on the Board of Directors for the Eagle Lake Community Association. He was also a member of the American Legion. Since moving to Monroe, NJ, he was an active member of St. James The Less Church. Ralph enjoyed playing volleyball, as well as, working on stained glass, taking care of his garden and spending time with friends. However, what he loved most was being surrounded by his family, especially his grandchildren. There wasnt an event he didn't attend, he was their biggest fan. Ralph was a loving and caring man, who will be deeply missed by all those that were blessed to have him in their lives. Ralph is survived by his beloved wife of 59 years, Lauretta, by his loving children, Rosalie Myers and her husband Scott, Diane Molloy and her husband Tim, and Maria Winters and her husband Russell; by his caring siblings, Maria Willis and her fiance George Belle-Oudry, Frank Serpe and his wife Mary and Robert Serpe and his wife Arlene; by his cherished grandchildren, Melissa, Kristen Lynn, Stephanie, Vanessa, Nicole, Christopher and Timothy, and by his cherished great-grandson Ryan. A live stream of the Funeral Mass link is listed below. It will be live 10-15 minutes before mass begins. https://vimeo.com/event/47678/embed A Funeral Mass will be held at 10:30 AM on Monday at St. James The Less Church located at 36 Lincoln Avenue, Jamesburg, NJ 08831. Interment will be in Moravian Cemetery, Staten Island, NY. The family will receive friends from 1:00 PM to 6:00 PM on Sunday, August 29, 2021, at Michael Hegarty & John Vincent Scalia Home For Funerals and Cremation Service, 3377 US Highway 9, Old Bridge, NJ. In lieu of flowers the family asked that donations be made to St.Jude Childrens Research Hospital or the Ronald McDonald House.

Raffaele Serpe (aka Ralph), 82 of Monroe Township, NJ passed away on Thursday, August 26, 2021, at the Geisinger Community Medical Center in Scranton, PA surrounded by his family. Born Thursday, October 6, 1938 in Brooklyn, NY, Ralph was the... View Obituary & Service Information

The family of Raffaele Serpe created this Life Tributes page to make it easy to share your memories.

Send flowers to the Serpe family.