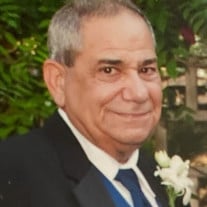 Philip S. Migliore, 66 of Staten Island, New York passed away surrounded by his loving family, Saturday, June 12, 2021, in Old Bridge, New Jersey. Born Thursday, February 10, 1955 in Staten Island, New York where he was raised. He was a graduate of New Dorp High School, class of 1973. Philip would then go on to meet and marry the love of his life of 20 years, Laura. After living in Staten Island and having four children together they would then move to Old Bridge, New Jersey in 1999. Philip was an automotive parts manager, as he was a avid lover of cars. He was a member of the Staten Island Flying Club and had a love for buying, collecting and fixing old model planes. Philip enjoyed going to Raceway Park to see classic car shows. Philip loved cars, airplanes and boats and an occasional fishing trip. He enjoyed listening to good music like The Beach Boys and Frankie Valli. Philip was a caring and loving man who enjoyed spending time with his family and friends, especially the time spent with his granddaughters. Philip would always make sure he was there for all special occasions. He lived his life for his children and his granddaughters, and never missed an opportunity to be with them. Philip will be deeply missed by all those that loved him. Philip was predeceased by his parents, Philip and Ann and by his sister Kathy Bosso. Also by his niece and nephew Loren and Carl DiFranco. Philip is survived by his beloved wife of 20 years, Laura, and by his loving children, Amanda Perelman and husband Eugene, Philip Migliore, Frankie Migliore and girlfriend Tatiana Crespo, Nicole Migliore and boyfriend Anthony Garvey. By his cherished granddaughters, Ameila Ann and Paisley Marie Perelman. Mother in Law Ann Major, his Niece Stacey Bosso and great nephew Joshua. Also by many nieces and nephews from the Major, Katz, and Bosso families. The family will receive friends from 3:00 PM to 7:00 PM on Thursday, June 17, 2021, at Michael Hegarty & John Vincent Scalia Home For Funerals and Cremation Service, 3377 US Highway 9, Old Bridge, New Jersey. Online condolences may be made to the family at www.HegartyScaliaFuneralHome.com

The family of Philip S. Migliore created this Life Tributes page to make it easy to share your memories.

Send flowers to the Migliore family.