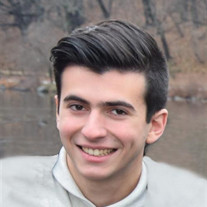 Peter William Marchese, 23 of Leonardo, New Jersey passed away on Wednesday, March 16, 2022, at University Hospital in Newark, New Jersey. Born Wednesday, February 3, 1999 in Staten Island, New York, Peter was the son of Lisa Marchese and the late Peter Marchese III. Peter would first live in Old Bridge, before his family moved to Marlboro. Peter would graduated from Marlboro High School, While in High School, Peter was a member of the school's band, where he played the Drums and also the Euphonium. Peter would meet his greatest friends in Marlboro. After High School Peter went on to attend Rutgers University, he graduated with dual Bachelor's degrees, one in Computer Science and another in Cognitive Science. Peter was working as an Information Systems Analyst for BASF Corporation in Florham Park. Peter was a talented musician, and continued to play the drums after high school. He loved computers and enjoyed gaming. He also enjoyed Dagorhir with his friends. He was a caring and loving young man and will be deeply missed by all those that were blessed to have him in their lives. Peter was predeceased by his father Peter III, and by his Aunt, Beth Ann Libecci, and by his grandfather Peter. Peter is survived by his beloved mother, Lisa Marchese, by his loving brother, Jake Marchese, by his adoring grandparents, William and Linda Archipoli and Arlene Marchese, by his caring step father Anthony Lenza, by his caring step brothers AJ and Nicholas Lenza, by his dear Aunt Lisa Marchese, by his dear Uncle Michael Libecci, and by his cherished cousin Kate Libecci. A Mass of Christian Burial will be held at 10:30 AM on Thursday at St. Ambrose Church located at 81 Throckmorton Ln Old Bridge, New Jersey 08857.

The family of Peter William Marchese created this Life Tributes page to make it easy to share your memories.

Send flowers to the Marchese family.