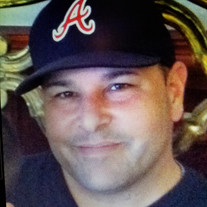 Peter Grivas, 44 of Manalapan, New Jersey passed away on Friday, June 1, 2018, at Memorial Sloan-Kettering Hospital in New York, New York. Born Tuesday, April 9, 1974 in Brooklyn, New York, Peter was the son of Peter Grivas and the late Nora Grivas. Peter was raised in Staten Island. He graduated from Tottenville High School and then attended the College of Staten Island. Peter worked as a Field Technician in Staten Island for Verizon Communications. He was a member of C.W.A. 1102. In 2004, Peter married the love of his life, Jennifer Monreale, and in 2006 the couple moved to Manalapan, NJ. Peter was beloved by all who knew him for his honesty, integrity, big heart and his unending spontaneous wit. The greatest joys of his life were spending time with his family, hosting BBQ's throughout the summer for friends and family, and just tossing a football around with the kids. He was an avid baseball and football fan and enjoyed following his two favorite teams, the Mets and the Jets. What was most important to Peter was his family, and he will be deeply missed by all of them and all of his friends that were blessed to have had him in their lives. Peter was predeceased by his loving mother, Nora. Peter is survived by his beloved wife, Jennifer, his adoring son, Jake, his father, Peter, his sister Christine Zicchinolfi, his brother-in-law John Zicchinolfi as well as an abundance of extended family including 11 loving nieces and nephews. In lieu of flowers the family requests that donations be made to Jake's college fund. The link is provided below. https://www.gofundme.com/jake-grivas-college-fund A Mass of Christian Burial will be celebrated at 11:00 AM on Wednesday at Holy Child Church located at 4747 Amboy Rd Staten Island, New York 10312. Interment will be in Resurrection Cemetery, Staten Island, NY. The family will receive friends from 2:00 PM to 4:00 PM and 6:00 PM to 9:00 PM on Monday, June 4, 2018, and Tuesday June 5, 2018 at The Michael Hegarty & John Vincent Scalia Home For Funerals and Cremation Service, 3377 US Highway 9, Old Bridge, New Jersey. Online condolences may be made to the family at www.HegartyScaliaFuneralHome.com

The family of Peter Grivas created this Life Tributes page to make it easy to share your memories.

Peter Grivas, 44 of Manalapan, New Jersey passed away on Friday,...