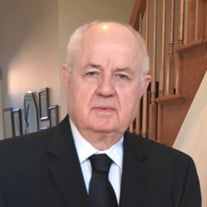 Peter Abatangelo, 77 of Old Bridge, New Jersey passed away on Sunday, January 31, 2021, at the Raritan Bay Medical Center in Old Bridge, New Jersey. Born Monday, September 20, 1943 in Mola di Bari, Italy, he was the son of the late, Vito and Caterina Abatangelo. Peter was raised in Mola di Bari,and at the age of 22 years old would immigrate to Canada. After spending some time there he would immigrate to the United States, living first in Chicago. Peter would meet the love of his life there, Clara Molinaro. The couple would marry, before moving to Brooklyn, NY. In Brooklyn they would raise their children. In 2007 Peter and Clara would move to Old Bridge. Peter worked for many years as a commissioner with the Department of Health in New York City. He retired in 2007. While living in Brooklyn Peter was a member of the Mola Club. A group of people all from the same home town in Italy. Peter was a collector of maps. He would enjoy his many trips home to Italy, where the family had a home, he loved taking his children there every year. Peter was a loving husband, father, and grandfather, and will be missed by all those that loved him. Peter is survived by his beloved wife of 51 years, Clara, by his loving children, Leonardo and wife Kourtney, and Daniela Carey and husband Thomas,and by his cherished grandchildren, Matthew, Thomas, Peter, and Sofia. A private family Entombment service will take place on Wednesday at the Holy Cross Burial Park, East Brunswick, NJ.

The family of Peter Abatangelo created this Life Tributes page to make it easy to share your memories.

Peter Abatangelo, 77 of Old Bridge, New Jersey passed away on...