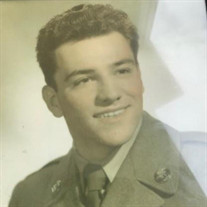 Pat Vincent : The Best of the Best! Surrounded by the love of his family, Pat Vincent, passed away on December 29, 2020 at the age of 88. He was born in Newark, New Jersey on May 14 1932. He moved to Belleville, New Jersey in 1968 where he lived until 1994, and then finally moved to Sayreville, New Jersey. He had numerous jobs throughout his life, but he truly enjoyed his time as a Corrections Officer. He retired from the Essex County Corrections Facility in 1978 and was a Veteran of the Korean War. The love he had for this family was immeasurable and spending time with them, was his greatest treasure. Though his health was failing for many years, he fought hard to live for his family. At the age of 43, he had a massive heart attack that left the doctors saying his days were numbered. The Lord graciously blessed us all with 45 more wonderful years with him. He was literally a walking miracle and everyday was a gift. Everyone loved his beautiful smile and wanted to be around him. He was the center of every occasion and always made everyone laugh with his charisma and contagious personality. He had the sharpest mind, the greatest voice and the biggest heart. He was everyone's number one fan and every one of his grandchildren was his "favorite". He was incredibly smart and there was nothing that he could not find a solution for. He has been called Mr. Fix-It, Superman, Bionic Man, Jack LaLanne, Johnny Garfield and Gene Kelly, to just name a few. He was the absolute best. No one loved his family more and no one was loved more than him. Pat was predeceased by his parents, Anthony and Florence (nee DeLorenzo), his brother Ralph and his sister and brother in law Eleanor and Nick Massa. He is survived by his beloved wife of 69 years Josephine (nee Cullari), his three children Anthony (and Maribel), Patti Palma (and Angelo), and Lisa Scirica (and Joe). He leaves behind his grandchildren: Patsy (and Rebecca), Angelo (and Erica), Alyssa, Anthony Jr., Gianine (and Rick), Geena, Christina, Jessica, Gabriella, and Joey. He was truly grateful that he lived to enjoy his three great-grandchildren: Alanna, Brielle and Adalia and was looking forward to meeting the fourth one on the way. In addition, he also leaves behind his sister Carmel DeMarzo (and Victor), sister-in-law Esther Vincent , along with many other sister and brother-in-laws, nieces, nephews and greats. Pat will be greatly missed and forever in our hearts. Due to COVID restrictions, there will be a private Celebration of Life Ceremony held in Pat's honor.

The family of Pat Vincent created this Life Tributes page to make it easy to share your memories.

Pat Vincent : The Best of the Best!

Surrounded by the love of...

Send flowers to the Vincent family.