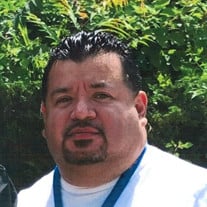 Nelson Perdomo, of Old Bridge, NJ, passed away on Thursday, April 9, 2020, at Raritan Bay Medical Center in Old Bridge, New Jersey, he was 44 years old. Born Friday, August 8, 1975., in El Salvador, to Regoberto and Nubia Perdomo. When Nelson was 3 years old his family would immigrate to the United States, They would settle in Elizabeth, NJ. His love of others, and search for justice, would be with him from an early age. He was always defending the kids in the neighborhood, making sure no one was being picked on. He would ride around his street on his CHiPs motorcycle, practicing for what would later be a career in law enforcement. Nelson would go on to graduate from Elizabeth High School. In 1996, he would meet the love of his life, Fanny Lopez. The couple would marry, in 2006. They would first live in Linden, NJ. Nelson would realize his lifelong aspirations of being in Law Enforcement come to life when he would become a corrections police officer at the East Jersey State Prison with the New Jersey Department of Corrections. Loved by all, Nelson was the friend that would do anything to help anyone, a real 'give you the shirt of his back' kind of person. From the moment you met him, you realized how genuine he was, and his actions proved that. In 2009, Nelson, Fanny, and their family would relocate to Old Bridge, NJ. Nelson was a member of the P.B.A.. He enjoyed taking trips to the beach with his family, and spending time at the shooting range with his brothers in blue. He was a loving man, and the world is a brighter place because of Nelson and the love and friendship that he gave. He will be deeply missed by all those that were blessed to have had him in their lives. Nelson is survived by his beloved wife, Fanny, by his loving children, Maya, Emma, and Nelson Jr., by his loving parents, Regoberto and Nubia Perdomo, by his cherished grandparents, Stella and Oscar Brand, and by his caring siblings, Jonathan Perdomo, and Cindy Ruiz. A private family service is being planned at this time. Online condolences may be made to the family at www.HegartyScaliaFuneralHome.com

The family of Nelson Perdomo created this Life Tributes page to make it easy to share your memories.

Send flowers to the Perdomo family.