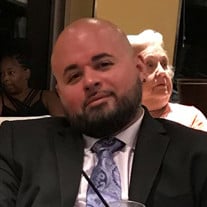 Nelson Esteves, 38 of Parlin, New Jersey passed away on Wednesday, November 7, 2018, at Robert Wood Johnson University Hospital in New Brunswick, surrounded by the love of his family. Born Saturday, December 29, 1979 in Perth Amboy, New Jersey., Nelson was the son of Vincente and Gladys Esteves. Nelson grew up in Perth Amboy and would graduate from Perth Amboy High School. Nelson had a love of cars. He not only liked the exotic cars, but also the classic cars. He enjoyed attending car shows. Nelson worked as an Automotive Transporter. Nelson would marry his lifelong friend, Maileen Pena in 2002, the couple was married for 16 years. They would move to Parlin and that is where they would raise their family. Nelson was a hero. In a final act of generosity in life, Nelson donated his organs so that others can live. He will be missed by all those that were blessed to have known him, and he will be forever loved by all those that were blessed by his generosity, and for that he will live on forever. Nelson is survived by his beloved wife Maileen Pena, by his loving children, Thalia Esteves, Karina Esteves, Nelson Esteves Jr., and Ava Esteves, by his cherished grandson, Gian, by his loving parents, Vincente and Gladys Esteves, by his caring brother, Vincente Esteves Jr., and by his loving mother in law and father in law, Martha and Ramone Pena. Funeral Services are private. Online condolences may be made to the family at www.HegartyScaliaFuneralHome.com

The family of Nelson Esteves created this Life Tributes page to make it easy to share your memories.

Nelson Esteves, 38 of Parlin, New Jersey passed away on Wednesday,...

Send flowers to the Esteves family.