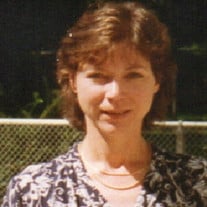 Micheline Zarobinski, age 69 of Old Bridge, New Jersey passed away on Monday, March 29, 2021, at the Raritan Bay Medical Center in Old Bridge. Born Monday, February 4, 1952 in Sherbrooke, Canada., Micheline was the daughter of the late Jean Paul Cote and Cecile Sevigny Cote, sister of the late Lise Cote and brother to the late Luc Cote. Micheline was raised and educated in Sherbrooke, Canada. In her youth, Micheline was an avid skier who would take on some of the most treacherous hills Canada had to offer without needing the aid of ski poles. It was on a trip to Lake George, New York, with her sister, where she would meet the love of her life, Charles Zarobinski. Marriage would come two years later in 1976. That same year, over the course of six weeks, the newlyweds would tour the country she would now call home by way of a Chevrolet Vega, before locating to Cliffside Park. They would then move to Fairlawn and start a family there, before settling in Old Bridge more than 37 years ago. Micheline worked as a bi-lingual office manager for Aramax Perfume Company based out of Paris, France before having children, after which she dedicated her life to raising her sons. Reading was Micheline's favorite pastime, though completing jigsaw and 3D puzzles, doing scratch offs with her husband, going on walks throughout the town, Sudoku, spending time on the computer to catch up on the news, check emails, and playing mystery games also interested her. In time she would grow to adore her adopted homeland and would acquire United States citizenship in 2007. Micheline was a lover of animals, she had two family dogs Zookie and Foxy, a bird Luigi, and felt solace being in the comfort of her home. She was a loving woman who will be missed. Micheline is survived by her beloved husband of 42 years, Charles, by her loving sons, Christopher and Kevin, and by her caring siblings, Denis, Guy, Jacques, Jocelyne, Johanne, and Sylvie. The viewing will be held Saturday, April 3, 2021 from 12:00pm-2:30pm with onsite funeral services from 2:30pm-3:00pm, at Michael Hegarty & John Vincent Scalia Home For Funerals and Cremation Service, 3377 US Highway 9, Old Bridge, New Jersey 08857. Online condolences may be made to the family at www.HegartyScaliaFuneralHome.com

The family of Micheline Zarobinski created this Life Tributes page to make it easy to share your memories.

Send flowers to the Zarobinski family.