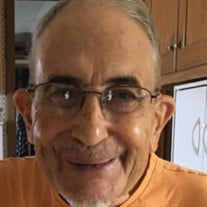 Michael P. (Mike) George, III, 85, of Laurel, Delaware, formally of Matawan, NJ passed away peacefully on Friday, August 28, 2020. Mike was born and raised in Matawan. He owned and operated Cliffwood Cabinet Shop for over 50 years. Mike was an avid skier, hunter, and fisherman, having skied many mountains in Europe and the United States. Among his favorites were Italy’s Dolomites and the Austrian Alps. In the United States, Mike’s favorite resort was Jackson Hole, Wyoming. He treasured his time skiing the many Utah mountains. Mike enjoyed hunting and belonged to various hunting clubs throughout his life. In particular, Mike loved hunting with his bow and arrow. He was a fisherman, having fished off the coasts of Belize and Alaska,. Mike was truly an avid outdoor enthusiast. Above all he was a loving husband, father, grandfather and great grandfather, who will be missed by all who knew him. Mike was a parishioner of St. Joseph’s Roman Catholic Church, Keyport, where he was a faithful member of the Knights of Columbus Council #3402. Later he became a parishioner of Our Lady of Lourdes Roman Catholic Church, Laurel, Delaware, where he soon became a member of the St. Molua Knights of Columbus Council #4075, Seafort, DE. He was predeceased by his wife of 56 years Dolores. Mike is survived by his children Rita Zalepka and her husband John, Virginia Lane and her husband James, and Michael George IV and his partner Noreen Medley. He is also survived by grandchildren John Zalepka, Jr., Mark Bendon and his wife, Angela, Jessica George, Alexandra George, Micaela George, great grandchildren Jacy Zalepka, Jaxon Zalepka, and Annabella Bendon. Visitation will be held on Monday, August 31, 2020 at Hegarty & Scalia Funeral Home, 3377 US Highway 9, Old Bridge, NJ, from 10 am to 12 pm, with a service beginning at 11:30 am. Entombment will follow at Forest Green Memorial Park Mausoleum

The family of Michael George created this Life Tributes page to make it easy to share your memories.

Send flowers to the George family.