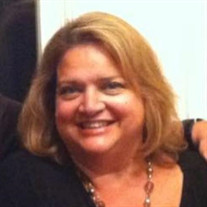 Maureen Frances Miller, 58, of Morganville, New Jersey, passed away at home on Monday, April 16, 2018. Born Sunday, October 4, 1959 in Brooklyn, New York, Maureen was the first born daughter of the late Francis and Eleanor Lewis. Maureen and her family moved to Staten Island in the 1960s, and she went on to graduate from Tottenville High School. With a strong desire to help people and an interest in public health, Maureen would go on to obtain her diploma in nursing from the St. Vincent's Hospital School of Nursing in NYC, after which she obtained a Bachelor of Arts Degree in English Literature and Psychology from the College of Staten Island. After a twenty year nursing career, Maureen combined her professional background with her legal ambitions and obtained a Juris Doctor with a concentration in Health Law from Seton Hall University School of Law. Maureen began working for the State of New Jersey in 2001, with the majority of her tenure at the Department of Health as a Research Scientist. Maureen and the love of her life, Michael, were married in 1981. They began their family on Staten Island with their only child, Stephanie, then moved to Freehold, New Jersey before settling in Morganville 23 years ago. In her spare time, Maureen loved spending time with her family, cooking meals for family gatherings, and vacationing in Myrtle Beach. Maureen was a brilliant, caring, and loved woman who will be missed by all who knew her. Maureen was the beloved wife of Michael for 37 years; loving mother of Stephanie, dear sister of Susan Papadopoulos and her husband, John; Janet Port and her husband, William; and Carolyn Lewis and her fiance, Christopher Rongo, fond cousin of Mariann Nocilla and her husband, James, and dear niece of Frank Riccio. Maureen was predeceased by her parents, Francis and Eleanor Lewis, and her aunt Marie Riccio. A Memorial Service will be held at 7:00 PM on Wednesday at Michael Hegarty & John Vincent Scalia Home For Funerals and Cremation Service located at 3377 US Highway 9 Old Bridge, New Jersey 08857. The family will receive friends for a Memorial Visitation from 4:00 PM to 9:00 PM on Wednesday, April 18, 2018, at Michael Hegarty & John Vincent Scalia Home For Funerals and Cremation Service, 3377 US Highway 9, Old Bridge, New Jersey. Online condolences may be made to the family at www.HegartyScaliaFuneralHome.com

The family of Maureen Frances Miller created this Life Tributes page to make it easy to share your memories.

Send flowers to the Miller family.