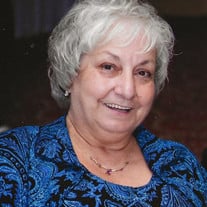 Mary Louise Chiarello, 77 of Freehold, New Jersey passed away on Tuesday, January 25, 2022, she was surrounded by her two sons Anthony and David and her daughters in-law Susan and Danielle at Centra State Medical Center. Born Thursday, February 24, 1944 in the borough of Brooklyn, New York, Mary was the daughter of the late Domonick and Mary Capobianco. Marylou was raised in the Gravesend section of Brooklyn, and was a graduate of Lafayette High School. She would go on to settle and raise her two sons in the Kensington part of Brooklyn. Where she was active in her son's school as a member of the P.S. 230 PTA. Later in life Marylou would follow both her sons to NJ, where she took residence in the community of Silvermead in Freehold, NJ. Marylou worked several jobs to provide for her sons. Settling as a Medical Technician at Methodist Hospital until her retirement. Earlier in life she enjoyed playing cards with her family and sister-in-law Wendy and bowling with both her brothers in Brooklyn. After moving to NJ, she again picked up bowling and other activities such as bocce, cards, Pokeno, shuffleboard, painting and crocheting with her friends (family) in Silvermead. Marylou enjoyed watching her Grandchildren participate in their extracurricular activities. Marylou also enjoyed going to dinners at Red Lobster and Olive Garden, visiting with her PA family and the occasional trip with close friends to Peddlers Village in Lancaster PA. She was an active member of Silvermead Community Club holding the position of corresponding secretary. She was also a member of the Freehold Senior Center. Mary was a loving and caring woman who will be missed by all those that were blessed to have her in their lives, and survived driving with her. Marylou is survived by her sons, Anthony his wife Susan, David his wife Danielle, by her caring brothers Rudy Capobianco his wife Christine and Dominick Capobianco, by her cherished grandchildren, Kaitlyn and Madison, and all her nieces and nephews. A Funeral service will be at 10:30 AM on Saturday, February 26, 2022 at St Ambrose located at 83 Throckmorton Ln Old Bridge, New Jersey 08857. Online condolences may be made to the family at www.HegartyScaliaFuneralHome.com

The family of Mary Louise Chiarello created this Life Tributes page to make it easy to share your memories.