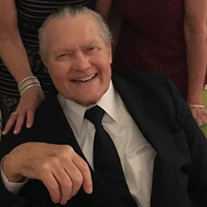 Martin Olano, 91 of Manalapan, New Jersey went home to the Lord on Saturday, August 8, 2020, surrounded by the love and prayer of his family. Born Friday, May 10, 1929 in Brooklyn, New York, Martin was the son of the late Martin and Josephine Olano. Martin was raised in Brooklyn, and after attending Midwood High School, he joined the United States Navy at the age of 17. Martin served his country proudly on the USS Missouri. After being honorably discharged, Martin returned to Brooklyn where he met the love of his life, Ida Montemarano. The couple began a courtship that would lead to a life-long love. After marrying in 1950, Martin and Ida started their family in Brooklyn before moving to Staten Island. Martin worked for the NYPD for 25 years, rising to the rank of Detective. He was well-respected and received many letters of recommendations from families whom he assisted during his time as a Detective in the Missing Persons Department. Martin was a very active member of his community. He was a member of the PBA, the DEA, and also a member of the Cops for Christ Christian organization. Martin and his family attended Gateway Cathedral, through which he led the prison ministry at Arthur Kill Correctional facility for many years. Martin would share his strong faith and love of his Lord and Savior Jesus Christ with anyone who would listen. His faith and testimony have inspired everyone who has had the pleasure of meeting him. After retirement from the NYPD, Martin and Ida moved to Arizona before returning back east to Toms River, NJ to be closer to their expanding family. Martin loved reading the Bible, donating to many charitable organizations, and spending time with his family. His biggest joy was being with his family, and they were blessed to have had him as a husband, father, and grandfather. Martin was predeceased by his beloved wife of 70 years, Ida, who went home to the Lord in February. He is also predeceased by his son-in-law, John J. Sciacca, and his sister, Josephine Olano. Martin is survived by his loving children, Christine Sciacca, Devra Olano, and Denise Sparnroft and her husband Ronald; by his cherished grandchildren, Janette Sciacca-Hillis, Noelle Sciacca, Kristin Accorsi-Alvarez, David Sparnroft, and Jared Sparnroft, and by his adoring great-grandchildren, Jaden, Mia, Asher, Nolan, Liesl, and Evangeline. A Funeral Service will take place on Friday at.11:30AM in the Funeral Home, interment at Brig. General Wm. C. Doyle Veterans Cemetery to take place after the services. The family will receive friends from 3:00 PM to 7:00 PM on Thursday, August 13, 2020, at Michael Hegarty & John Vincent Scalia Home For Funerals and Cremation Service, 3377 US Highway 9, Old Bridge, New Jersey. In lieu of flowers, the family asks that donations in Martin's memory are made to Samaritan's Purse at https://www.samaritanspurse.org/memorial-page/martin-olano-toms-river-nj/ During the current phase of reopening there is a maximum of 50 people allowed in the funeral home at anytime. We kindly ask that you pay your respects and then exit the funeral home to allow others to pay their respects as well. Thank you for your understanding. Online condolences may be made to the family at www.HegartyScaliaFuneralHome.com

Martin Olano, 91 of Manalapan, New Jersey went home to the Lord on Saturday, August 8, 2020, surrounded by the love and prayer of his family. Born Friday, May 10, 1929 in Brooklyn, New York, Martin was the son of the late Martin and Josephine... View Obituary & Service Information

The family of Martin Olano created this Life Tributes page to make it easy to share your memories.

Send flowers to the Olano family.