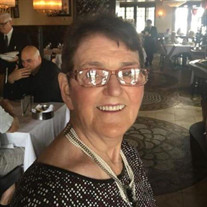 Margaret Kokas, 79 of Old Bridge, New Jersey passed away on Friday, December 11, 2020, at the Jersey Shore Medical Center in Neptune, New Jersey. Born Wednesday, April 2, 1941 in Galway, Ireland, Margaret was one of 11 children born to Christopher and Celia Murphy. After attending school in Ireland Margaret would join her oldest sister in the United States in 1962, moving to the Bronx. Soon after that Margaret would meet her future husband, and the couple would have a daughter, and resided in the Bronx.. They would then live in Manhattan before moving to Manchester, England. After their second daughter was born the family would move to Staten Island, where they would have a son, then Tennessee, before returning to New York City, living in the Bay Ridge section of Brooklyn. It was later in life that Margaret would move to Old Bridge. Margaret worked as a switchboard operator for many years. She enjoyed watching Jeopardy, and taking trips to Atlantic City. Margaret most enjoyed spending time with her children and family, especially going to Brunch with the whole family. She was a dedicated mother who will be deeply missed by all those that loved her. Margaret is survived by her loving children, Cecelia Bader and her husband Hal, Cathy McEvoy and her husband Kevin, and Steven Kokas, and by her cherished grandchildren, Shannon Bader and Michael Kokas. The family will receive friends from 3:00 PM to 7:00 PM on Monday, December 14, 2020, at Michael Hegarty & John Vincent Scalia Home For Funerals and Cremation Service, 3377 US Highway 9, Old Bridge, New Jersey. Online condolences may be made to the family at www.HegartyScaliaFuneralHome.com

The family of Margaret Kokas created this Life Tributes page to make it easy to share your memories.

Send flowers to the Kokas family.