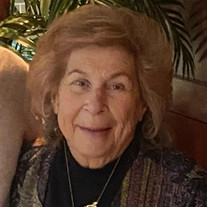 Margaret Ann Manzo Gordon, 80, of Manalapan, New Jersey, passed away on January 16, 2022. Margaret was born on February 19, 1941 to Angelina and Charles Manzo, in Brooklyn, New York. Margaret graduated from Prospect Heights High School. She worked at Chemical Bank in Manhattan, Dime Savings Bank and Ship Supply Company in Brooklyn, and then worked as a Legal Secretary to Phil Kaplan, Esq. on Staten Island. She loved all her jobs, but especially loved her work with the Law Firm. She met the love of her life, Robert Gordon, on a bus going to work in Brooklyn. Robert came from a large Irish family including five sisters: Kathleen, Annmarie, Sissy, Joanie, and Ilene and four brothers: Tommy, Buddy, Georgie, and Richie. Margaret loved being part of Robert's big Irish family. Margaret and Robert married on November 4, 1962. They created a loving home in Brooklyn just down the block from her mom and dad. Their first daughter, Angela was born while they lived in Brooklyn. Margaret and Robert purchased a house in Oakwood, Staten Island. Their second daughter, Janice Ann and their son, Robert were born while they lived in Staten Island. Throughout the years the family developed many loving and lasting friendships with their neighbors. Margaret was always involved in creating a better and happier community wherever she was. She served on the Board of Directors at their vacation home in the Pocono Mountain Lake Estates, where she was instrumental in organizing numerous events for the community, such as, casino nights, fashion shows, game shows, bus and boat trips and a full-fledged carnival. Family was always Margaret's number one priority. When her beloved husband, Bob died at 57 on October 27, 1997, Margaret was left to care and guide three children on her own. Margaret also took in her father after her mother passed away. Margaret's love and compassion never wavered despite the struggles she faced. She always took care of her family. Twenty years ago, Margaret left Staten Island and moved into a mother-daughter home with her daughter Angela and her son-in-law Frank in Manalapan, New Jersey. Her son-in-laws Frank and John were always there for her. She also spent countless hours with her sister and best friend, Janice and brother-in-law Richard at their home in Jackson, New Jersey, where she was a vital part of the South Knolls community. She was a founding member of the Italian American club and served on their advisory board. Margaret was also an active member in the Women's club. Her true passion was being involved in organizing card games. Margaret also often spent time in Villa Roma where she forged friendships and made many memories that she cherished. Margaret loved life, vacations, playing cards, board games, going to the casino, helping others, and giving out sage advice. The true love of her life has always been her dedication to her three children and five grandchildren. Margaret fiercely loved her daughter Angela, son-in-law Frank, her daughter Janice Ann, her son Robert, future daughter-in-law Carrie, her grandchildren, Frankie and Robert Attanasio, John and Angelina Runfolo and Justin Gordon. Their mutual love and respect is obvious to all who knew them. Margaret adored them and was heard singing their praises to whomever would listen. Halley, the precious Blue Nose Pitbull, provided her endless comfort and security. We know Halley had a special place in Margaret’s heart. She loved her unconditionally. Margaret also loved her Siblings who she had their own special bond with. Janice, her surviving sister, looked to Margaret for guidance, love and support. Margaret's late brother Frank Idolized her, and the feeling was mutual. Margaret adored her niece and nephew, Audrey Ann and Richard Charles, as well as Frank and Irene’s children, her nieces and nephew, Rosemary, Elaine, Frances, and Charles and Charles’ wife Marianne. Margaret held a special place in her heart and life for all her great and great-great nieces and nephews. Margaret continued to organize the annual Manzo Christmas, bringing all the extended family together. Margaret was the embodiment of Love, a true Matriarch. She touched the lives of anyone she encountered and was always there for her family and friends. Margaret was a loving, passionate, caring, and compassionate woman full of wisdom and a sharp wit. Margaret was an engaging storyteller with a wonderful sense of humor and a knack for remembering the family's stories. Margaret was quite a force to be reckoned with and a real and vital presence in our lives. Margaret was adored by her family and friends. A strong, intelligent, and loving inspiration to all who knew her. Her passing has truly left an empty space in the hearts and lives of her family and friends. Margaret has now returned to the loving arms of her beloved husband Bob who has patiently waited for her. They are both smiling down upon their children, grandchildren, and all of us. Reposing at the Hegarty-Scalia Funeral Home, Old Bridge, New Jersey - Thursday January 20, 2022, 4:00 pm to 8:00 pm St Thomas More Roman Catholic Church, Manalapan, New Jersey - Mass Friday January 21, 2022, at 10:00 am In lieu of flowers, the family requests donations be made by check to St. Jude

The family of Margaret Gordon created this Life Tributes page to make it easy to share your memories.

Send flowers to the Gordon family.