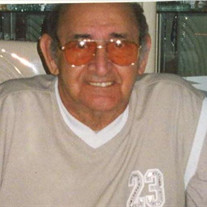 Louis Evangelista, 88 of Manchester, New Jersey passed away on Saturday, May 23, 2020, at Community Memorial Hospital in Toms River, New Jersey. Born Tuesday, July 7, 1931at home in the Bronx, New York, he was the son of the late Savino and Anna Evangelista. Louis would graduate from high school in the Bronx. After that he would join the United States Army, serving his country honorably during the Korean War. He would earn his discharge and return home to the Bronx. It was during a trip to Orchard Beach in the Bronx he would meet the love of his life, the former Frances Guarino. The couple would become engaged and eventually marry in 1956. They would live in the Bronx before moving to Jackson Heights, Queens. They would raise their sons there. Louis was a carpenter and member of the union. After their sons were older, they would move to Staten Island. Louis was a parishioner of Our Lady of Pity Church. it was 12 years ago that Louis and Frances would settle in Manchester, NJ. Louis enjoyed watching baseball and was a fan of the NY Mets, he also enjoyed NY football. Louis enjoyed playing cards and being with friends, but most of all he loved being with his family. Louis was always a family man, first he had a deep love for his wife, he was the perfect husband for almost 64 years of marriage, always taking care of his beloved wife, he was a role model as a father, and a caring grandfather and great grandfather. He was a special man, and will be missed terribly by all those that loved him. Louis was predeceased by his loving son, Michael Evangelista who passed away just a day before. Louis is survived by his beloved wife Frances, by his loving son, Louis and his wife Lorraine, by his caring sister, Marie Schioket, by his cherished grandchildren, Nicole, Jamie, Lori Anne, Michael Jr., and Ashley, and by his adored great grandchildren, Michael, Craig, Joseph, Cameron, James, Johnny, Gabriela, and Vincent. Funeral services will be private and followed by interment at Brigadier General Wm. C. Doyle Veteran's Cemetery, Wrightstown, NJ. Online condolences may be made to the family at www.HegartyScaliaFuneralHome.com

Louis Evangelista, 88 of Manchester, New Jersey passed away on Saturday, May 23, 2020, at Community Memorial Hospital in Toms River, New Jersey. Born Tuesday, July 7, 1931at home in the Bronx, New York, he was the son of the late Savino and... View Obituary & Service Information

The family of Louis Evangelista created this Life Tributes page to make it easy to share your memories.

Louis Evangelista, 88 of Manchester, New Jersey passed away on...

Send flowers to the Evangelista family.