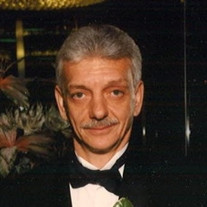 Lawrence J. Sarnelli, 72 of Marlboro, New Jersey passed away on Friday, April 19, 2019, at Centra State Medical Center in Freehold, New Jersey. Born Monday, July 1, 1946 in Brooklyn, New York, he was the son of the late Albert and Angelina Sarnelli. Lawrence was raised in Brooklyn, NY. He would go into the family business at an early age, starting his life long career at the Fulton Fish Market at the age of 15. He would soon take over the 3 generation old family business, Albert's Fulton Fish Market. In 1994 he would marry his beloved wife, Barbara, and the two would eventually relocate to Marlboro, NJ. In his spare time he enjoyed hunting and trips to Atlantic City. He had an eye for collecting antiques. Most of all he would enjoy cooking and eating, especially seafood. Among many other things, he will be missed for his knowledge of how to prepare any kind of seafood. Lawrence also had a love for his pets, especially his dog Jade, they would do many things together. They would feed the backyard wild birds, go to work, watch TV and eat McDonalds. Jade even went to the local Chase bank with him. He also had a love for people and would befriend many, even the stranger on the street. Lawrence would help anyone in need. This would be proven after the attack on 9/11. When people sought refuge by going to the East River, he and those he worked with at the Fulton Fish Market assisted them in anyway possible. He continued to work on South Street until the market moved to the Bronx in 2005. Years later his work ethics and dedication to the family business would affect his health and Lawrence would be certified by the WTC Health Program as a survivor of 9/11. He was a loving husband, father, grandfather, and friend, and he will be missed by all those that were lucky to have known him. Lawrence is survived by his beloved wife of 25 years, Barbara, by his loving daughter Danielle Sarnelli, and loving step-daughter, Lara Pilkerton and her husband Lance, by his cherished grandson, Michael Sarnelli, and cherished step-grandchildren, Winter and Madison Pilkerton, by his caring sister in law Wendy Lurie, and by his loving niece, Linda Onzo and her husband Timmy, and by loving great nephews, and great-great nephews. A Mass of Christian Burial will be celebrated on Friday, April 26, 2019 at 10:30 AM at St. Ambrose Church, Throckmorton Lane, Old Bridge. Entombment to follow at Rosedale Cemetery, Linden, NJ. The family will receive friends from 2:00 PM to 4:00 PM and 6:00 PM to 9:00 PM on Wednesday, April 24, 2019 and Thursday, April 25, 2019 at The Michael Hegarty & John Vincent Scalia Home For Funerals and Cremation Service, 3377 US Highway 9, Old Bridge, New Jersey. Online condolences may be made to the family at www.HegartyScaliaFuneralHome.com

The family of Lawrence J. Sarnelli created this Life Tributes page to make it easy to share your memories.

Send flowers to the Sarnelli family.