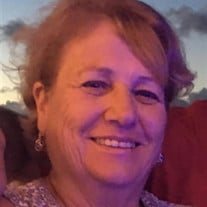 Karen Treubert Langan, 73, formerly of Sayreville and a current resident of New Egypt, passed away on May 27, 2022 in the care of her loving family. Karen was born on June 21, 1948 in Bronx, NY. She was one of four children, and according to her siblings, the most spoiled. Karen loved growing up in the Bronx and sharing memories of Valentine Avenue and her years at Saint Simon Stock and Aquinas High School (she never missed a class reunion). She believed that the best Italian restaurants lined the street of Arthur Avenue and appreciated returning over the years to reminisce and enjoy a delicious meal with her brother, sisters, sister-in-law Grace, and cousins. In 1968, she met Thomas Langan of Scranton, PA at the Cuckoo's Nest in the Bronx. They married in 1969 and moved to the Old Bridge section of New Jersey in 1972 to raise their family. Karen was a committed wife and mother and an active member of the Madison Park community. She coached girl's softball and cheerleading, became a Girl Scout leader, attended almost every football, baseball, and basketball game that her son played, and volunteered at her children's elementary school. Karen was a skilled bowler and a regular at the old Hill Lanes bowling alley, playing in leagues with her son, younger daughter, and many neighborhood friends. She and Tom would remain married until his passing in 2003. The only thing Karen relished more than being a mom was being a devoted grandmother. Her grandchildren affectionately called her 'Nanny Grandma', and she regularly hosted sleepovers, tagged along on summer vacations, and enthusiastically took on the roles of go-to babysitter and pinch-hit taxi driver. She was also a regular presence at her grandkids, sporting, music, and school events. Karen enjoyed simple pleasures such as bingo with her girlfriends, listening to music (especially from the 50s), dancing (she was an excellent Lindy Bop partner), playing Left, Right, Center with her brother and sister, reading James Patterson books, watching classic Hollywood films (Jimmy Cagney movies were here favorite), and in her later years, painting landscapes. She was an avid Mets fan, which brought her occasional joy but mostly a lot of heartbreak. Karen worked hard all her life, first and foremost as a homemaker and then in the mid-80s as a store manager for Foodtown in South Amboy. She retired from her job in 2003, freeing her up to spend even more time with her grandchildren. To everyone's delight, in 2017, Karen again found joy in her personal life when she reconnected with her high school sweetheart, Robert 'Bob' O'Connor, after 53 years. They traveled when they could, spending winters in Arizona, Aruba, and South Carolina. They recounted memories of the good old days, laughed, embraced each other's family, and watched baseball (he even got her to root for the Yankees, or at least to pretend to). They genuinely enjoyed each other's company and created beautiful memories together. It became the perfect final chapter in a cherished life and Bob remained by Karen's side even as her health declined this past year. Karen is predeceased by her husband, Thomas, her parents, William and Margaret Treubert, and her sister Marilyn Parks. She is survived by her children, Kellie Walenciak and her husband Matt, Michael Langan and his partner Maria Funkhouser, and Jean Marie Lucas and her husband Marcelo, her grandchildren, Dylan, Ryan, and Sienna Walenciak, Cristina and Michael Langan, and Kylie, Thomas, Ryan and Michael Lucas, her sister Eileen Stanton and brother Billy Treubert, her partner Bob O'Connor, several brothers- and sisters-in-law, and many nieces, nephews and cousins. Karen's story will live on through those who loved her most and we - her children and grandchildren - will miss her deeply and remember her always with smiles and laughter for the rest of our lives. The family will receive friends from 2:00 PM to 4:00 PM and 7:00 PM to 9:00 PM on Monday, May 30, 2022, at Michael Hegarty & John Vincent Scalia Home For Funerals and Cremation Service, 3377 US Highway 9, Old Bridge, New Jersey. A Funeral Mass will be at 10:00 AM on Tuesday at Our Lady of Victories Church located at 42 Main Street Sayreville, New Jersey 08872. In lieu of flowers donations in Karen's memory can be made to the COPD Foundation. Online condolences may be made to the family at www.HegartyScaliaFuneralHome.com

Karen Treubert Langan, 73, formerly of Sayreville and a current resident of New Egypt, passed away on May 27, 2022 in the care of her loving family. Karen was born on June 21, 1948 in Bronx, NY. She was one of four children, and according to... View Obituary & Service Information

The family of Karen Langan created this Life Tributes page to make it easy to share your memories.

Karen Treubert Langan, 73, formerly of Sayreville and a current...

Send flowers to the Langan family.