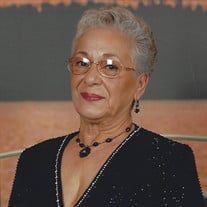 Josephine Matullo (Polese-DeVizia) was born to Luigi and Pasqaulina Polese in Elizabeth, N.J., on September 28th, 1938. She attended Battin High School in Elizabeth, N.J. Josephine married her high school sweetheart Charles E. DeVizia on July 2nd, 1955, in St. Anthony of Padua Church, Elizabeth, N.J., and rejoiced in sixteen loving years together. They would raise ten children, whom Charles would refer to affectionately as “The Jewels in her Crown”. They moved to Matawan, N.J., where she would live for the next thirty years. She unexpectedly lost her loving husband in May of 1971 and courageously raised her family as a single mother until marrying Renaldo Matullo in 1975. They lived a full life together until his passing in February, 2018. Josephine was active in church and community services through her children and many dear friends, first as a communicant of St. Joseph’s Church in Keyport, and later at St. Clement’s Church in Matawan. Josephine was a lifelong fan of parades and in 1986 she was nominated to produce Matawan Borough’s Tricentennial Parade. She became an advocate for those stricken with AIDS when her son Anthony contracted the virus in 1987. Josephine coordinated early efforts for the Hyacinth Foundation and spoke publicly on AIDS awareness and for the compassionate treatment of those who suffered from the disease. After moving to Toms River in 1993, Josephine continued her work in the healthcare industry, serving as the Activities Director for the Kensington Manor Nursing and Rehabilitation Center of Toms River. Josephine passed away suddenly at Jersey Shore Medical Center in Neptune, N.J. on Sunday May 15th. “The Jewels in her Crown” were by her side. Josephine is remembered by her friends as someone who had a compassionate ear, a warm and loving heart, and a great sense of humor. Her children will remember her as a dedicated, hardworking, protective, and loving mother, who will be dearly missed. She is predeceased by her son Anthony DeVizia, her sister Jenny Borner, her brothers Louis and Ciro Polese, as well as her sons-in-law Dieter Zimmer and Nicholas Gallo. She is survived by her daughters Patricia Zimmer (and her life partner Ray Cottone), Josie Gallo, Christine Ostner (and her husband Paul), Kathleen DeVizia, Mary DeVizia (and her husband Charles Waidler), Ann Marie Leiter (and her husband Mark), Linda DeVizia, her sons Charles DeVizia and William DeVizia (and his wife Lorraine). Josephine had 11 grandchildren, many extended family, and close friends who were as family. In lieu of flowers the family suggests a donation be made in Josephine's memory to: The Hyacinth Foundation 317 George Street, Suite 203 New Brunswick, NJ 08901 https://www.hyacinth.org A Funeral service will be held at 10:30 AM on Tuesday, June 14, 2022 at St. Clements Church located at 172 Freneau St Matawan, New Jersey 07747. The family will receive friends from 4:00 PM to 8:00 PM on Monday, June 13, 2022, at John Vincent Scalia Home for Funerals & Cremation Services Inc., 111 Main Street, Matawan, New Jersey.

The family of Josephine Matullo (Polese-DeVizia) created this Life Tributes page to make it easy to share your memories.