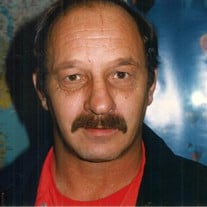 Joseph Weingartner, Jr., 76 of Old Bridge, New Jersey died on Thursday, February 15, 2018, at his home. Born Thursday, December 4, 1941 in Newark, New Jersey, Joseph was the son of the late Joseph Sr., and Helen Weingartner. Joseph was raised in Newark, NJ. After High School Joseph would join the United States Army, he spent time stationed in Germany. After returning to the United States he would marry Patricia Kloman and eventually they would move to Irvington where they would start their family. In 1984 the family relocated to Old Bridge and have been residents since. Joseph worked security for the Dynamic Trucking company. He was a member of the Elks in Old Bridge and also the American Legion. In his spare time Joseph enjoyed going to the gun range. Joseph was predeceased by his parents, his wife of more than 30 years Patricia who passed away in 2010, and by his sister Mary Sibiga, brother John Weingartner and brother in law, Timothy Wilson. Joseph is survived by his loving son Joseph and his Fiance, by his sister Beverly Wilson, and by loving nieces and nephews. A Funeral service will be at 10:00 AM on Tuesday at Michael Hegarty & John Vincent Scalia Home For Funerals and Cremation Service located at 3377 US Highway 9 Old Bridge, New Jersey 08857. Interment will be in Chestnut Hill Cemetery, East Brunswick, NJ. The family will receive friends from 2:00 PM to 4:00 PM and 7:00 PM to 9:00 PM on Monday, February 19, 2018, at Michael Hegarty & John Vincent Scalia Home For Funerals and Cremation Service, 3377 US Highway 9, Old Bridge, New Jersey. Online condolences may be made to the family at www.HegartyScaliaFuneralHome.com

The family of Joseph Weingartner, Jr. created this Life Tributes page to make it easy to share your memories.

Send flowers to the Weingartner family.