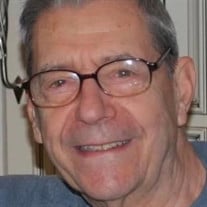 Joseph Masseria, 95 of Old Bridge, New Jersey passed away on Tuesday, June 7, 2022, at home, surrounded by the love of his family. Born Monday, September 20, 1926 in Calabria, Italy, Joseph was the son of the late Frank and Angela Masseria. Joseph would immigrate to the United States in 1933, at the age of 7. The family first settled in Downtown Brooklyn. After graduating from High School Joseph joined the United States Navy. He first worked as a Longshoreman, before joining the Garment Union in Manhattan. It was while at work he would meet the love if his life, Fannie Meyers. The couple would marry and first live in Astoria, before moving to Bensonhurst to raise their children. They remained there before moving to Staten Island, and then Old Bridge. While living in Brooklyn, Joseph was active in the Brooklyn PAL, volunteering for many years as a baseball manager. As a part time limousine driver Joseph was often joined in his care by many different Hollywood Celebrities, including Robert DeNiro. He was a big fan of baseball, and a longtime NY Yankees fan, and subsequently any team that Jason happened to play ball for. He would enjoy going out fishing, playing knock rummy, and playing the horses. Joseph was a loving and caring family man, who will be deeply missed by all those that were blessed to have him in their lives. . Joseph was predeceased by his caring sisters, Elizabeth Muscarella, and Rose Andersen. Joseph is survived by his beloved wife of 71 years, Fannie, by his loving children, Angela Bellomo and her husband Anthony, Frank Masseria and his wife Anna, and Joseph Masseria Jr, and his wife Michele, by his caring sister, Mary Aliotta, by his cherished grandchildren, Laura Aversano, Tony Bellomo Jr and his wife Robin, Debra Marquis and her husband Jason, Charles Bellomo and his wife Danielle, Cathy Pellecchia and her husband Chris, Joseph Masseria and his wife Amanda, Angela Masseria, Kristine Masseria, Nicole Masseria, Josephine Comitini, Isabella Comitini, and Christopher Comitini, and by his cherished great grandchildren, Reese, Gianna, Andrew, Maria, Anthony, Frank, Lexi, CJ, Tony III, ,Charles, Giuliana, Gabriella, Charlotte, Frankie and Nicholas. The family will receive friends from 4:00 PM to 8:00 PM on Thursday, June 9, 2022,and Friday June 10, 2022 at Michael Hegarty & John Vincent Scalia Home For Funerals and Cremation Service, 3377 US Highway 9, Old Bridge, New Jersey. A Funeral Mass will be at 10:00 AM on Saturday at St. Ambrose Church located at 81 Throckmorton Ln Old Bridge, New Jersey 08857. Online condolences may be made to the family at www.HegartyScaliaFuneralHome.com

Joseph Masseria, 95 of Old Bridge, New Jersey passed away on Tuesday, June 7, 2022, at home, surrounded by the love of his family. Born Monday, September 20, 1926 in Calabria, Italy, Joseph was the son of the late Frank and Angela Masseria. Joseph... View Obituary & Service Information

The family of Joseph Masseria created this Life Tributes page to make it easy to share your memories.

Joseph Masseria, 95 of Old Bridge, New Jersey passed away on...

Send flowers to the Masseria family.